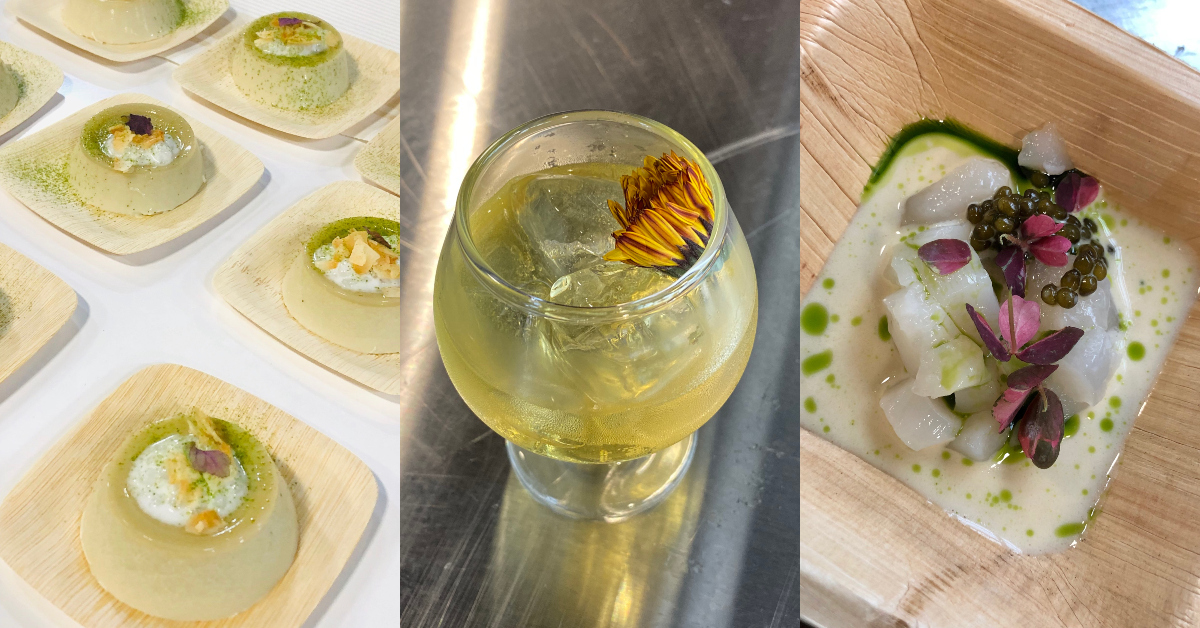 Some of the best chefs, mixologists, and pastry chefs from around the world gathered, showcased their skills, and shared their culinary knowledge at the Brooklyn Expo Center for the 2019 StarChefs International Chefs Congress (ICC). The three-day event, which took place from October 27-29, was an opportunity for members of the food and beverage industry to see and taste what the most brilliant minds in the industry are cooking up in their kitchens and behind the bar. While each chef presents their own distinct identity on a plate, they also show some similarities and a sense of unity in the flavors, ingredients, and food concepts that they play with.

These are some of the trends that dominated not only the Brooklyn Expo Center floor, but are making their way into restaurants and dining experiences all over the world:

1. Fermentation 2.0 Meets Fruit
Pickled raisin sofrito, cantaloupe vinegar, calvados soaked cherries, and different yeasts were used to add some flavorful funk, acidity and brightness to the dishes and drinks at the 14th Annual StarChefs ICC. Fermentation isn’t exactly a new and innovative method, but it is one that continues to be a staple on the rise, with more chefs assigning fermentation stations in their kitchens. This year we saw an array fermentation methods take a focus on fruits. Chef Curtis Gamble from Pittsburgh’s Station took fermentation to the next level with his dish of miso-braised Japanese eggplant, black garlic royale, cantaloupe vinegar and sungold tomato. We found that fermented fruit added a level of sweeteness to the otherwise souring processes used by chefs and mixologists alike.

Beyond flavor, fermentation has its clear benefits and that wasn’t left out from ICC conversations. Chef Brad Deboy of Ellé also points out that fermented food isn’t just delicious, but has health benefits as well. “I got my start when I had a catastrophic illness when I was 22. I was paralyzed, and I used fermentation as a way to heal myself, and it became a hobby, then I started using it in the kitchen,” he told Symrise. “I was already using it in the kitchen before that, and now I promote it to use it in everything I do.”

2. Chefs Make Health a Priority
Aside from veg-forward dishes and the use of mushrooms, more chefs are looking into catering to their customers’ allergies and sensitivities. Chef Diego Guerrero of dStage shared his efforts of utilizing fresh produce and prime ingredients to create more dishes that are naturally gluten-free and dairy-free.
Night two of the Congress featured a friendly competition among chefs under the name of the Chef Ann Foundation’s Real School Food Challenge. With a budget of $1.25 per plate, Chefs were challenged to design a balanced dish under the suit of educating children about heathly-eating. Chef Mihoko Obunai from Midtown International School in Atlanta took home the prize with her simple yet nutritious dish of Japanese chicken curry with rice.

Mixologist Pamela Wizniter said that more and more people are moving away from sugary cocktails, but instead are choosing more low-proof cocktails with ingredients like turmeric, acai, and matcha. Chef Eric Plescha of Charcoal BYOB was particularly excited about a new sugar approved by the FDA called allulose, which isn’t as sweet as normal sugar and supposedly lowers blood sugar. “So people who are diabetic can actually indulge in sweets without having to worry about sugar levels,” Plescha shared.

3. Seasonal, Sustainable and Spectacular!
Along with health-consciousness is also consciousness about environmental impact. Many of the chefs at the convention made sure to source their ingredients seasonally, ethically, and sustainably from companies, local farmers, and butchers they trusted and partnered with. A ripe example for season and sustainably sourced ingredients comes from 7A Food’s Chef Daniel Sauer whose Umami Tsunami sandwhich featured an ingredient list fresh from Martha’s Vineyard. The sandwhich was a delicious combo of roasted shiitakes, pimento, pickled jalepenos and greens – a tsunami of seasonal flavors!

With the ICC being held at the peak of fall, there were many pumpkin and squash dishes, potatoes, apples, as well as the use of warm spices such as cinnamon, nutmeg, cloves, and coriander. As an example, Kensington Quarter’s Matt Harper was a featured Chef at the Steelite’s demo booth who served a Winter Squash Salad with apple, buttermilk & herbs

4. Minimalism in the Kitchen
Previously, trendy restaurants would pack as much as they could into one dish — over-the-top fries, instagrammable waffles for brunch, resulting in a lot of elements on a single plate. Now, simplicity and minimalist dishes with a labor of love are taking over.

Chef Carlos Raba of Clavel likes to stick to his Mexican roots, by keeping all his dishes simple so as to showcase classic flavors. He served a barbacoa tostada, which was a quick but satisfying bite with an edge of spice.

“I love that everyone’s getting back to rustic. I love that everyone’s making pastas and doing everything from scratch,” said Chef Brother Luck of Four by Brother Luck. “I think simplicity is in right now, and we need to continue that.” Chef Luck served European veal shank, green chile, blue corn grits, pickled red onion, and avocado crema, an earthy and delicious dish.

RELATED: A Look Back at Top Trends From StarChefs International Chefs Congress

5. Crossing Borders and Fusing International Flavors
Many chefs have also been challenging their chosen cuisine’s traditional limits. “I see a lot of restaurants go a lot more out of their natural ethnic boundaries, and being more experimental,” said Chef Fiore Tedesco of L’oca D’oro. This is especially applicable for chefs who have different worldwide restaurant locations. Chefs Jamie Bissonette and Ken Oringer of Toro cook Spanish food, but with their location in Bangkok they were able to use Southeast Asian flavors and ingredients such as lemongrass and galangal to give their traditional dishes a twist. It isn’t exactly fusion, since the goal is to replicate similar flavor profiles, and a familiar feeling when eating the dish.

6. Age-old African Spices and Ingredients Today
At Symrise’s customary roundtable, Cafe Boulud Pastry Chef Shaun Velez said that one of the most interesting things they’re currently playing with in the kitchen is the African spice blend ras el hanout. “We’re making a ras el hanout ice cream – and everyone has their own secret blend of ras el hanout, some have cinnamon, some have cumin – but being able to start something like this where we’re using sweet things on the plate like a toasted almond cream or orange blossom,” Velez said. “There’s so many different flavors and so many different elements and textures that play off each other so that it still comes out very balanced and clean.”

Chef Jonathan Benno of Leonelli Taberna, played off Velez’s excitement for the African spice with his own experience, “Using the example of ras el hanout, to study a spice blend that has a thousand year history and is made differently in a relatively small part of the world, to me that’s one of the most exciting things about being a chef—if you challenge yourself there is always something new to learn.” During the roundtable, it became apparent that Chefs and Mixologists like Mea Leech are finding exciting ways to resurrect ancient spices in modern and innovative ways.

Chef Kwame Onwuachi also gave a talk on the main stage about West African, specifically Nigerian ingredients and dishes. Dishes like moi moi, puff puff, and chin chin all make use of nutmeg — an essential in Nigerian kitchens.

7. Israeli Inspired Flavors
Another cuisine that seems to be on the rise is the food from Israel. “I’m seeing more pomegranate syrup. Zahav has pretty much gotten national accreditation at this point,” Kocab said. “So anything along those Israeli flavor profiles I’ve seen a lot more across the board. And I think that’s because the general public is becoming more and more familiar with those flavor profiles.” Pastry Chef Tova du Plessis of Essen Bakery agreed with these sentiments. She said, “There’s definitely a big interest in Middle Eastern flavors. I’ve seen that a lot,” she said. “These flavors — the citrus, the nuts, the spices that you find in that part of the world, or part of that cuisine since thousands of years ago, are becoming popular.”

8. Hearty Bases for Wholesome Dishes
Following the theme of the entire ICC, “new foundations,” many of the presenters made sure to give hearty — but not too decadent — bases to all of their dishes. Brother Luck used blue corn grits as a base for his veal shank dish, Scott Drewno from Chiko used rise porridge in his Korean version of shrimp and grits, Olivia Chef Matt Kuhn’s bright chicken tagine sat on a helping of farro couscous, Drew Adams of Bourbon Steak had a rich scallop cream to round out his dish, and David Kocab had a foraged acorn ragu to complement his pig’s heart cavatelli. Even Pastry Chef Abby Swain from Temple Court used a frozen olive oil base, topped off with a concord grape sorbet, for her perfect parfait.

9. Mother Sauces - Nouveau Style
‘What’s your mother sauce?’ was the lunch theme for Day 1 of the Congress. Mother sauces were (and still are) very French and part of the basic techniques within the culinary world. Today we’re seeing new influences from Asia and other part of the globe evolving what the traditional style of ‘mother sauce’ means to Chefs.

Beyond the Plate Good Libations Sweet Talk
❤4
back