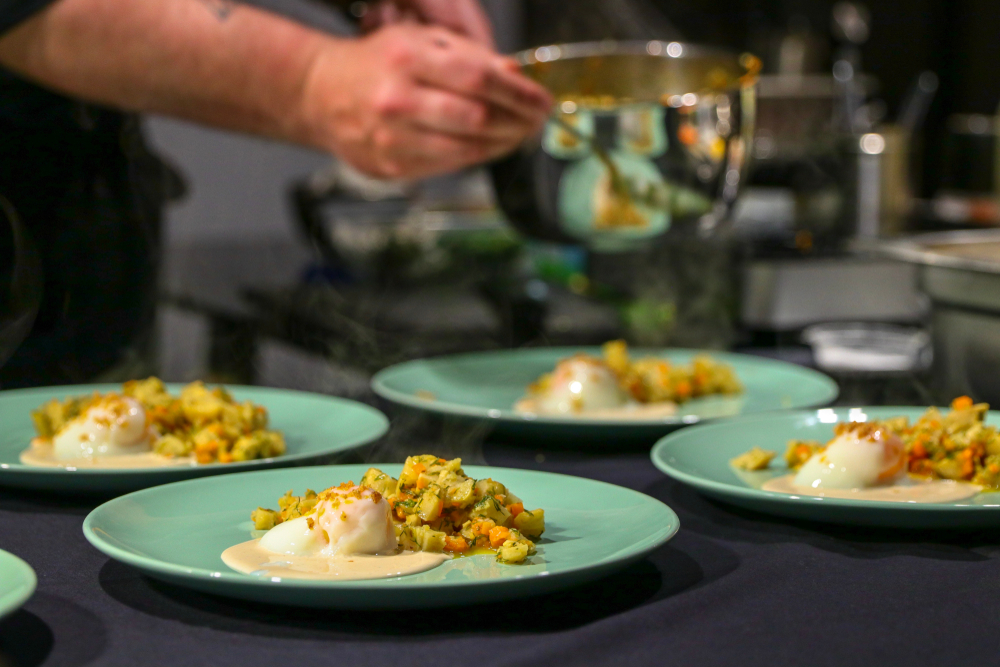 Chef Ted Lee of The Lee Bros. on Comfort and Bold Flavors

Ted Lee has never been more excited about cookbooks. The category, he told Symrise, is strong and getting stronger. As reported recently in Forbes, sales of print cookbooks rose 21 percent in 2018 compared with 2017, according to data collected by NPD Bookscan.

This, despite the proliferation of the countless online recipes, cooking apps, newsletters and websites of restaurants and chefs.

And while Lee can’t predict what 2020 will bring, he’s pretty confident the uptick will continue, not only because of strong interest, but because conventional routes to publishing are diversifying. More authors can choose to publish themselves, go through University presses or do simple booklets for relatively little cost.

Lee should know. He and his brother, Matt, who together co-founded The Lee Bros. Boiled Peanuts Catalogue, a mail-order catalogue for Southern pantry staples like stone-ground grits, fig preserves, and, boiled peanuts, long ago made the transition from a direct mail business (which they still have) to food and travel writers to cookbook consultants known for their chef bootcamps, a business they started in 2012 to educate food and beverage professionals about best practices in book publishing.

Their foray into this business is circuitous (and entwined) but always included food at its core. The snappy writing in their catalogue attracted the attention of Travel & Leisure editors which lead to a story about road-tripping across their home state of South Carolina in search of great food, which then led to a second career as sought-after food and travel journalists. Credits include The New York Times, Food & Wine, Bon Appetit, Garden & Gun, and Martha Stewart Living, among others.

Plus, they’ve been on-air commentators for The Cooking Channel show Unique Eats and hosts of their own travel show, “Southern Uncovered with The Lee Bros.

And there’s more: In April 2019, they published their first non-cookbook: Hotbox: Inside Catering, the Food World's Riskiest Business which reveals, in what bestselling author of Heat Bill Buford called “a gleeful, fly-on-the-lip-of-a-saucepan narrative,” the competitive, wild world of high-end catering. And if that’s not enough, they’re working to transform that material into a documentary series. In the works – though Lee wouldn’t reveal too much as he needs to be anonymous – another narrative nonfiction about a food culture that, he told Symrise “is hiding in plain sight.” And, oh yeah, he and his brother continue to consult with programming for food festivals (a whole other topic we didn’t even touch).

But, back to cookbooks for a minute: He and Matt collectively have between 1,600 and 2,000 and are always collecting. “Cookbooks are a world,” he said. You inhabit it; you share it with a friend; you dive into it and use it to cook for friends.”

And even if he’s not using, say 200, of his vast collection, he takes pleasure in knowing they’re there, like an old friend you haven’t seen since high school. A glance at one recipe can transport you to another world in an instant, said Lee, including a remote part of Spain in 1990 or Julia Child’s 1960s kitchen.

We sat down with Lee – he lives in Brooklyn while Matt resides in Charleston, where they grew up – to talk books, his restaurant fantasy and what’s in his fridge.

Growing up in Charleston – his family moved there from New York when he was 8-years-old --really immersed the Lee brothers into the world of food. He and Matt grew up shucking oysters, casting nets and catching shrimp. “I think growing up in Charleston was really the thing that leads you to be aware of food in a way that maybe is a little bit unique in the sense that so many rites of passage around growing up are tied to food,” he said.

Though, as a kid, his interest in crabbing and fishing was more sport and fun than something he thought would transition to a career, these experiences -- being tied to the land and to the nature of where food comes from -- became ingrained in his soul. Another big influence on his food life: Becoming his dad’s prep cook. The brothers’ mom was a long-distance commuter when the Lees were in high school, going to New York during the week and Charleston on weekends, leaving the question of who was going to make dinner.

“My dad loved to cook – that was my parents’ only hobby,” he said. “And though we weren’t necessarily ambitious cooks, I learned a lot.”

Indeed, it was that love for the foods they grew up with that led to the brothers’ boiled peanuts catalog, which started when the Lees graduated college in June 1994. Frustrated they couldn’t find their favorite foods in New York City, they tried selling them at restaurants and bars but soon discovered going direct to catalog was better.

As someone who writes about food, cooks dinner five to six nights a week, takes pride in ingredient shopping and meets with chefs regularly in his cookbook boot camp, the question is a natural one: Did Ted ever want to be a chef? The short answer is no, though he admits to having “a ton of respect for restaurant chefs.”

The longer answer is that, as someone who grew up cooking and also worked for an uncle who owned a restaurant in Toronto for a couple summers, he “got” pretty early that while he loved cooking at home, he didn’t have the stamina, skill, talent and drive to work the line at a restaurant.

He, does, however, admit to a “restaurant fantasy” of a very narrow place with only bar seating where everything is a terrine. “Just slices, that’s all you’re served,” he said. “Everything comes out in a loaf pan and is served in slices in front of you, with nice glasses of wine.”

Pork shoulder slow-cooked with a bunch of pickled jalapenos is his (and his wife’s) go to. He also likes cooking Cantonese fish, basically steamed fish with scallion-soy-ginger sauce, as well as beef brisket mole. “I just love these flavor combinations and textures. With the mole and the pork shoulder we’ll always serve pickles or pickled onions,” said Lee. “There’s something about the crunch and the acid and that savory rich meaty flavor that’s just great. Texture for me is a huge part of the appeal of flavors.”

Lee tends to fall in love with a flavor and then go hard on it for six months and then lay off it and then come back to it. A favorite at the moment is coriander chutney. “I make a dip that’s so easy: non-fat yogurt with toasted coriander seeds and cumin and coriander chutney which then inspired me to experiment with different dressings and marinades [using coriander chutney],” he said.

Tamarind is something else he’s been experimenting with. “I love simple things that are comforting and boldly flavored.”

Just because he’s a cook doesn’t mean he has to make everything himself either. As a fan of Chef Gabrielle Hamilton who talks about elevating things that are close at hand, he’s a big believer in supermarket ingredients. “I don’t have to learn to make coriander chutney myself to have that satisfaction of that flavor. Similarly, I can buy a jar of chili crisp and have it on my table tonight!” he stressed.

What’s in His Fridge

“A lot of leftovers.” That means some beef brisket mole, a pint of homemade ginger-scallion sauce (Francis Lam’s recipe), Michael Solomonov’s hummus [the recipe from the chef’s cookbook Zahav], a jar of kimchi, a bottle of smoked shoyu, Hellman’s mayo, Heinz ketchup, a couple jars of bitters (Fee’s Plum and Angostura), eggs, radishes, tabasco, tamarinds he never quite figured out what to do with and Picamas Salsa Brava Hot Sauce.

Lee gets a lot of his inspiration from – no surprise! -- reading cookbooks. “If you really sit with them and if they’re written well, the cook is telling you how they incorporate ideas into food and that becomes a real source of inspiration to me,” he said. “That really fires up my mind.”

Dining out is also a big source of inspiration, encountering different techniques and seeing how chefs put various twists on entrees.

“We’re creatures of habit,” he said, meaning he and his wife tend to go to neighborhood eateries super early, so they don’t have to wait – they live in Brooklyn. That includes Win Son, Faro, Misi, Lilia, Roberta’s and Maison Premiere, the latter of which he loves for oysters.

He’s also a fan of Fanelli Café on Prince Street where “they have the best burger” and Prune on East First Street where he recently took his wife for her birthday. Lee also sorely misses Annisa which used to be on Barrow Street.

As for what chefs should know about getting their cookbooks published, Lee said it’s both easier and harder than one would think. “If you’re already a chef with a following it can be easy: Generate a proposal and get an agent,” he said.

The hard part is finding the time and attention. “You also need to figure out what the book is about,” he said. “Is it about you and your restaurant? Or is it a technique book, in which case it needs to stand out from the ocean of books already out there, or is it more of a memoir-esque book?”

Another question: Will it translate for home cooks?

Lastly, will you write it or are you going to hire a co-author? If you outsource it, he said, you need to make sure you create a book that still represents you.

“We’re always telling people – you might want to work on your second liquor license or think about opening another space so you can put your kids through college before you think your cookbook will be profitable,” he advised. “Cookbooks are very specific things and you can’t bank on the fact that they’ll make you money.“