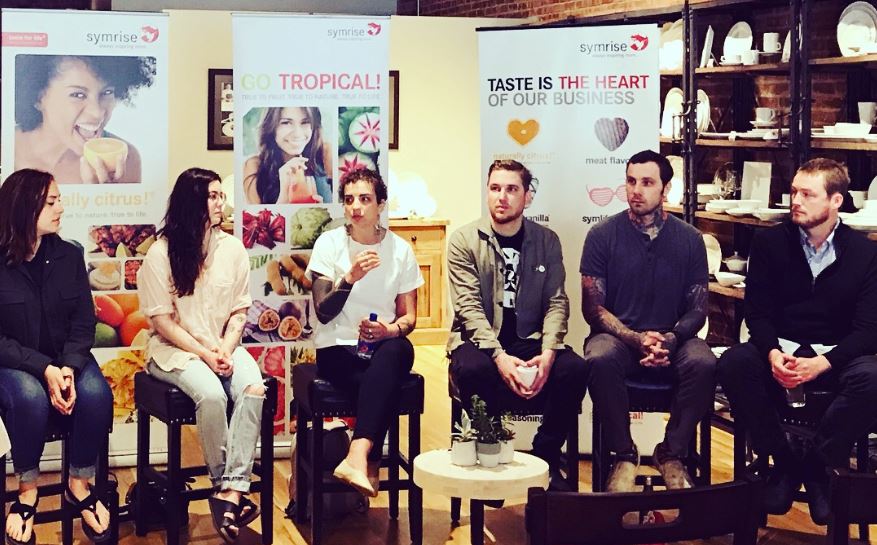 Creative Culinary Winds are Blowing in the Windy City

The level of anticipation was unusually high upon entering the StarChefs “Rising Star Innovation Roundtable” in Chicago, sponsored by Symrise Inc. After all, while few chefs in the public eye can make so much as a midnight snack without having their choice of ingredients and methods analyzed in minute detail by media and the blogosphere, this gathering was no mere piece of chef performance art. As teased out by roundtable moderator Emmanuel Laroche, Symrise’s VP of Marketing & Consumer Insight Driven Innovation, the chefs in attendance were opening a window into the more intimate aspects of their creative process.

In a synergistic format that allowed them to build upon each other’s input, Pastry Chef Leigh Omilinsky, of Nico Osteria; Chef Ryan Pfeiffer, from the highly respected Chicago institution, Blackbird; Chef Noah Sandoval, from Oriole; Pastry Chef Emily Spurlin, from the “mostly vegetarian” restaurant Bad Hunter; third-generation meat master Brian Ahern, from Boefhaus; and mixologist Jacyara Di Oliveira of El Che Bar treated attendees to a morning that amounted to a whole greater than the sum of its arts. That’s not a misprint: The art of creating flavors and flavor combinations is more challenging when the audience is composed of R&D and food tech experts from some of the most forward-thinking food companies.

Laroche kicked off the panel discussion by diving straight into the deep-end of the creativity pool. Asking, “How do you approach innovation?” he quickly demonstrated that the order of the day was technique and ingredient insight. 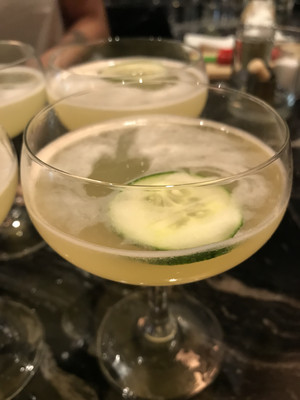 El Che Bar’s Di Oliveira caught the line drive and detailed how she tackles a flavor-development task by working from the outside in…and back out again. “I get a story in my head first,” she said, and described how the “futuristic, striking design” of a hotel bar—“beautiful, sleek, cool, futuristic” was her first inspiration. “[While] the menu was classically driven, in that settings framework, I played off the flavors in the restaurant menu.” Di Oliveira described how she built a Caramelized Rum Old Fashioned. “In Argentina, there’s a fad of presenting an Old Fashioned [whiskey or brandy with sugar and bitters and a twist of citrus] with caramelized sugar flamed in the glass. I adapted the idea to something more functional. I doused demerara sugar [partially refined light brown cane sugar] with high-fruit rum, lit it, and let it burn down into a syrup.” Di Oliveira then noted how she added two or more different types of bitters.

Bad Hunter’s Spurlin, working within the frame of a predominantly vegetarian venue, explained how her creative efforts are by necessity “plant-forward, flavor-driven, ingredient driven.” Citing the challenges inherent in catering to the current vegan trends, she zeroed in on one of the toughest challenges in that category: creating a vegan dessert. With eggs and dairy being fundamental to what so many think constitutes dessert, her need to find suitable substitutes for these fundamental flavor and textural ingredients echoed that of many food industry product developers.

“Many dessert chefs use tofu, avocado, or coconut to get a creamy texture,” Spurlin explained. “I try to use them as the focus versus a foundation for texture. Spurlin cited a lime mousse she made with avocado for texture, adding mango and chili pepper and cilantro. She pointed out both that botanically, avocado is a fruit yet few culinarians approach it from that angle. She then noted how including the flavoring ingredients typically associated with avocado — chili pepper and cilantro — could be manipulated to bring the element of surprise to a meal’s grand finale. 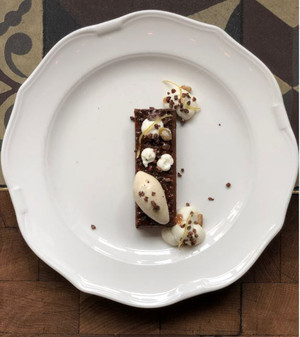 Omilinsky, of Nico Osteria, let’s the neighborhood and its clientele drive her creative thought processes. “Gold Coast clientele are very specific about their wants,” she noted, explaining that she approaches her menu with the idea that you can end any meal at any restaurant with a “warm chocolate thing” and have success. Emphasizing the desire to recreate the “comfort and nostalgia that comes with food,” she stressed that there’s “no need to recreate the wheel — seasonality and quality ingredients are the focus.”

Omilinsky prefers to work with the seasons, but also enthusiastically embraces the idea of preserving the season’s produce. She cited as an example taking fresh black concord grapes and pickling, freezing, or otherwise preserving them for application in off-season recipes.

At Boefhaus, Chef Ahern also pays close attention to seasonality. Referring to rhubarb as the “first exciting produce of the spring season,” he elicited a surprised interjection from Laroche regarding the openness to trying the astringent vegetable by consumers. This turned the conversation to the regionalist aspect of menu development.

“In Chicago and the Midwest, people already are open to rhubarb,” he explained. And it should be noted that the sweet-sour flavor of rhubarb has been inching its way into the mainstream through beverages and in such products as yogurt and spreads, as well as showing up on lists of burgeoning flavor trends.

As for his creative process, Ahern was quick to note that, unlike the old paradigm of chefs de cuisine as dictatorial “artistes,” sees himself “as a filter and an organizer,” explaining, “I have a great staff, a creative staff with great ideas” and he puts a lot of energy into encouraging that staff to participate in the creative process.