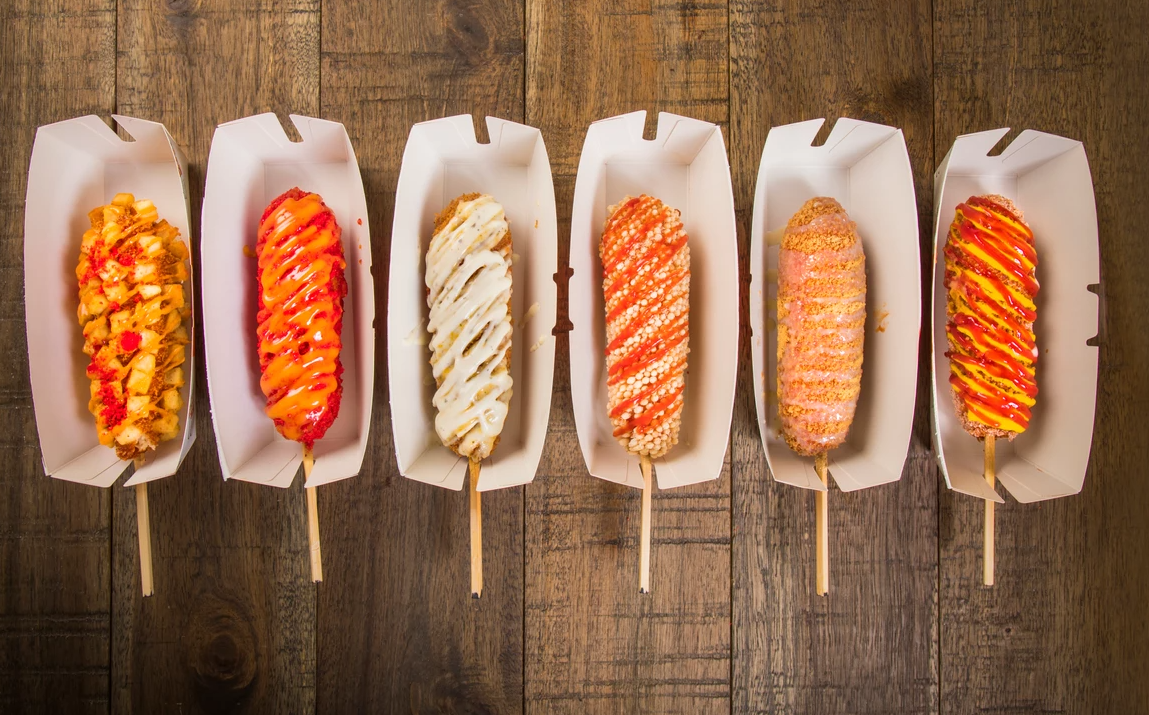 Street food fans are abuzz with chatter about a food trend that is hitting the streets from Chicago to L.A. to New York: the Korean hot dog.

The Korean hot dog isn’t the meaty stick in a bun we’re used to, which makes it an excellent way to try something new and delicious. The Korean hot dog is lighting up the street food scene across the country, so hop on the trend and see what it’s all about!

Hot dogs have been a popular street food in Korea since the 1980s. Back then, Korean hot dogs were just traditional hot dogs in buns topped with bulgogi or kimchi.

The “new” Korean hot dogs have been around overseas since the 2010s. The credit for taking the traditional hot dog to this elevated level often goes to the Myungrang Hogdog company in Pusan. The trend spread across Asia, then to Australia, then landed in the U.S. state of Georgia in 2018.

Korean hot dogs look like the corn dogs on a skewer that everyone is familiar with, but the coating isn’t the traditional, cornmeal-based batter that American corn dogs are dipped in.

While the most common coating for Korean hot dogs is rice batter, popular alternatives include:

Sometimes, the batter will even contain small, cubed potatoes.

It’s What’s Inside that Counts

Korean hot dogs are often served up with melted cheddar, mozzarella, or pepper jack cheese inside, but they can be made without any cheese, as well. Actually, Korean hot dogs don’t even have to be made with hot dogs — they can feature sausage, fish cakes, cheese sticks, vegan alternatives, rice cakes, or even Spam.

Toppings are either savory or sweet and can include anything from green tea, squid ink, mustard, sriracha, and ketchup to sprinkles of sugar or fruit flavor infusions.

When the batter creates a fried potato-crusted infusion, it’s known as a “gamja” hot dog. Gamja is “potato” in Korean. This version offers a hot dog with French fries all in one. It’s especially popular in the U.S.

Other Variations of Korean Hot Dogs

Korean hot dogs are crispy on the outside and chewy on the inside, regardless of the coating or the flavor. If you have one that contains cheese inside, be prepared for a legendary cheese pull. You can check out some incredible ones on social media. The hashtag #KoreanCornDog has been used hundreds of thousands of times across social media just in the last year, and it shows no sign of slowing down any time soon.