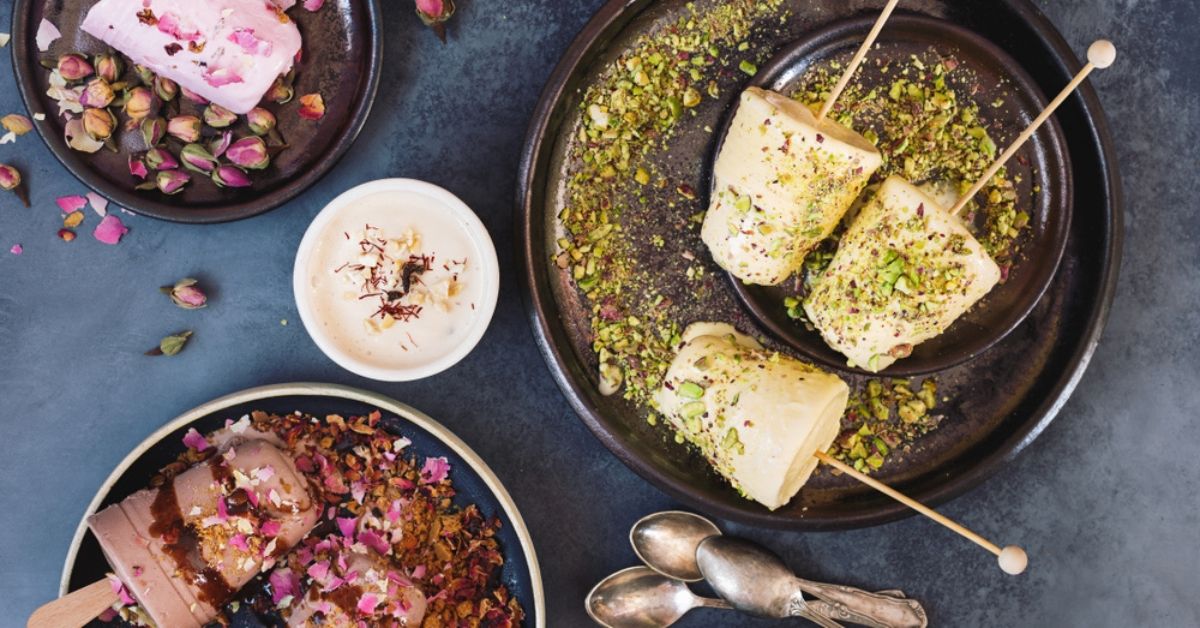 Ice Cream Report: Spice and Savory Flavors on the Rise

July is National Ice Cream Month, and what better way to celebrate than with a heaping bowl of plain old, classic … white chocolate turmeric ice cream? Last summer, at the height of the ice cream season, we saw trends emerge, that featured unique, global ingredients from savory, spice, and herbal categories that created a lot of buzz for consumers who crave a little adventure in their indulgence. While rainbow sprinkles and chocolate dip may have been the staple toppers for a cone in the past, don’t be surprised if these days you hear your local ice cream vendor ask you if you’d like to throw in the ‘kitchen sink’ with an array of sweet, crunchy and exotic add-ins.

As we saw at the 2019 Summer Fancy Food Show, sweet and savory ice cream combinations got more complex as they grew in popularity in the indulgence category. Unique pairings to consider from our 2020 Top Tends Report include salted lemon or a smoked salt to give the chilly confection a kick of spice. Frankie & Jo’s in Seattle serves vegan ice cream with an interesting take combining the sweet with the savory, like the Chocolate Tahini Supercookie with tahini and chocolate. They also don’t shy away from spice and salt with sweet cream, like their Salty Caramel Ash with activated charcoal and sea salt and Gingered Golden Milk with turmeric root, ginger, cinnamon, cardamom and black pepper. 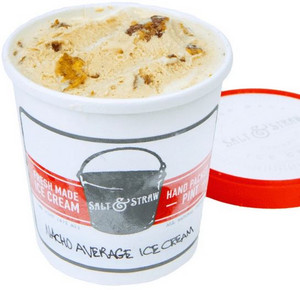 There’s also those who are pushing the idea of creating savory ice cream to the extreme with ingredients that at first thought, have no business being sent through the ice cream machine. Salt and Straw Portland make the Nacho Average Ice Cream, which contains cheese, sweetened corn chips, ancho chile, and cinnamon, combining to create a “frozen nacho cheese” taste sensation in the mouth. This unexpected flavor ties into our 2018 Opposites Attract trend, Cheese Ice Cream, were we saw the close dairy cousins of cheese and ice cream merge into one.

Uniquely Spiced from Around the World

As we’ve tracked with our Emotional Discovery TrendScope trend, which highlights how the globalization of taste and flavor is becoming more mainstream due to taste explorers like Generation Z and Millennial consumers, it’s no surprise international flavors are present in every category as a rising trend, especially in dessert items as people look to find more interesting, balanced alternatives to overly sweet treats. After reviewing menus in New York City, we found that cinnamon is the most popular ice cream spice, occurring in 29% of all ice creams dubbed “spiced” while ginger shows up in 9% of all “spiced” ice creams.

We also looked at spices in ice creams as a whole and noted that cinnamon, saffron, ginger and cardamom were among the most popular, while other exotic combinations include honey saffron and pistachio cardamom. Malai in NYC is known for incorporating aromatic spices and South Asian ingredients into their ice cream, like their popular rose with cinnamon flavored almonds. Also in New York, Il Laboratorio del Gelato has crafted hundreds of gelato flavors and are at the forefront of the spice meets sweet trend with flavors like allspice, cardamom, Mexican cinnamon, Vietnamese cinnamon, juniper, and peppercorn in black, pink, and white varieties. They also dip their toes into herbal flavors like fresh mint, rosemary, sage, tarragon, and wasabi.

When consumers are looking to expand their palates, the easiest way to offer something new is to pair a familiar flavor with one less conventional to the ice cream category. This is one way to introduce new, savory ingredients to traditionally sweet dishes, ensuring that the flavors complement each other. Other categories we’ve seen this method of introduction includes truffle fries and brisket mac and cheese booms, leading the public to the revelation that everything tastes better with truffle oil and meat tastes good in mac and cheese. 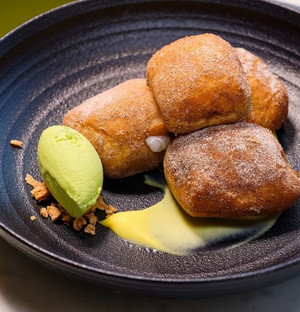 The same is being done with topping with or mixing into ice cream typically finishing ingredients people already use, like vinegar, olive and herbal oils, sea salt, and spice, that add an unexpected and pleasant punch of flavor. Across the country, restaurants are embracing this trend: in San Diego, Animae serves a green curry ice cream with lemongrass and Thai chile sauce; in Twin Cities, Bebe Zito has a Gochujang Brownie flavor; and in Dallas, Azúcar Ice Cream Co. mixes rosemary olive oil into their sweet cream.

Plants and herbs have been making a big impact for years in introducing many mainstream consumers to unique global flavors like sumac, epazote, Thai basil, shiso and more. This year, we predicted pandan from southeast Asia was on the rise as it started to reach out beyond Asian dishes along with other local indigenous herbs.

With a flavor akin to vanilla and almond, pandan makes the perfect ingredient for ice cream. In Houston, Phat Eatery, alongside Malaysian staple flavors like Durian and Ube, is ahead of the game with their Pandan ice cream made with toasted coconut, milk, sugar, and curry.