This is the latest post in our 2014-2014 Starchefs International Chefs Congress Series on in-sight.

Why Peru? It’s a question Chef Jaime Pesaque of Mayta in Lima addressed at the StarChefs 9th Annual International Congress (www.starchefs.com/cook/events/icc/2014). Two reasons, he says. One: The rich culture and cuisine of the area, including the fact that the country is full of diverse micro-climates like the Rain Forest, the mountains, and the Pacific, all of which grow vastly different species of products which add distinct flavors to a dish – not to mention inspiration. And two: The rich traditions.

“The essence of Peruvian cuisine is to use indigenous ingredients,” he stressed. “It’s a cuisine that takes time and patience but when you eat it, you get an aromatic piece of the country.” His presentation included a behind the scenes look at one of the country’s popular dishes: Cuy, or guinea pig. His demonstration included Crispy Guinea Pig, with Choclo, Goat Cheese-Stuffed Rocoto Chilie and Muña oil.

Oils, he said, are essential to Peruvian cooking and he felt so passionate about them, he handed out small samples he had blended to the crowd to try at home “on salad,” he said. Another “must” used in Peruvian cooking and echoed by the second presenter, Chef Diego Muñoz’s of Astrid y Gastón is Leche de Tigre, aka Tiger’s Milk, basically a marinade of coriander, lime, chili, ginger and fishy juice (though each chef professes to have his own recipe).

Pesaque also discussed the blending of cultures – Chinese, Japanese, Italian – that helped form Peru’s gastronomy. Ceviche and tiradito (raw fish, similar to sashimi) have much in common with Japanese cooking.

But it’s Peru’s distinct, humble ingredients that were the star of the show. Muñoz passionately discussed Peru’s various varieties of corn including yellow, black, and white. But even more than corn, it was potatoes that got the attention of the crowd, with a Peruvian farmer displaying his wares of colorful, exotic looking potatoes and the wheeling in of a huatia, a traditional earthen oven which dates back to the days of the Incas. A banquet prepared with this sort of oven is known as a “pachamanca” and involves wrapping potatoes in banana leaves at the bottom of a deep hole before adding rocks heated on a fire. This is then buried for several hours until the potatoes are soft. (It is also done with meat but for these purposes, the crowd only experienced the potatoes with an array of sauces on the side.) 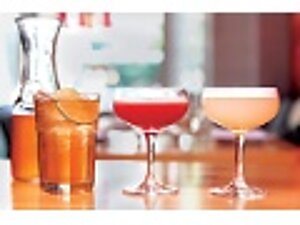 Staying true to one’s heritage – echoing the honest, authentic theme of the conference – seems to be at the heart of Peruvian cooking, as showcased by Chef Marita Lynn of Marita Lynn Catering in Red Bank, N.J. who served Aji de Gallina, and Causa at the Products Showcase. She also spoke at length about the various grains of quinoa –approximately 3,000 kinds –  along with shrimp (a key Peruvian export) and native veggies like artichokes, peppers of all kinds, potatoes, olives and herbs like huacatay, aji amarillo, and chile paste, to create signature Peruvian dishes like Ceviche, Huancaina Empanadas, and Papa a la Huancaina. Truly, there is also no end to what you can do with quinoa, she said, including quinoa tamales, quinoa with olives and fried fish. Possibly the most interesting use of the grain was using white quinoa, which has no flavor, to make quinoa brownies, which were gobbled up by the crowd.

Beyond the Plate Good Libations Events
❤0
back