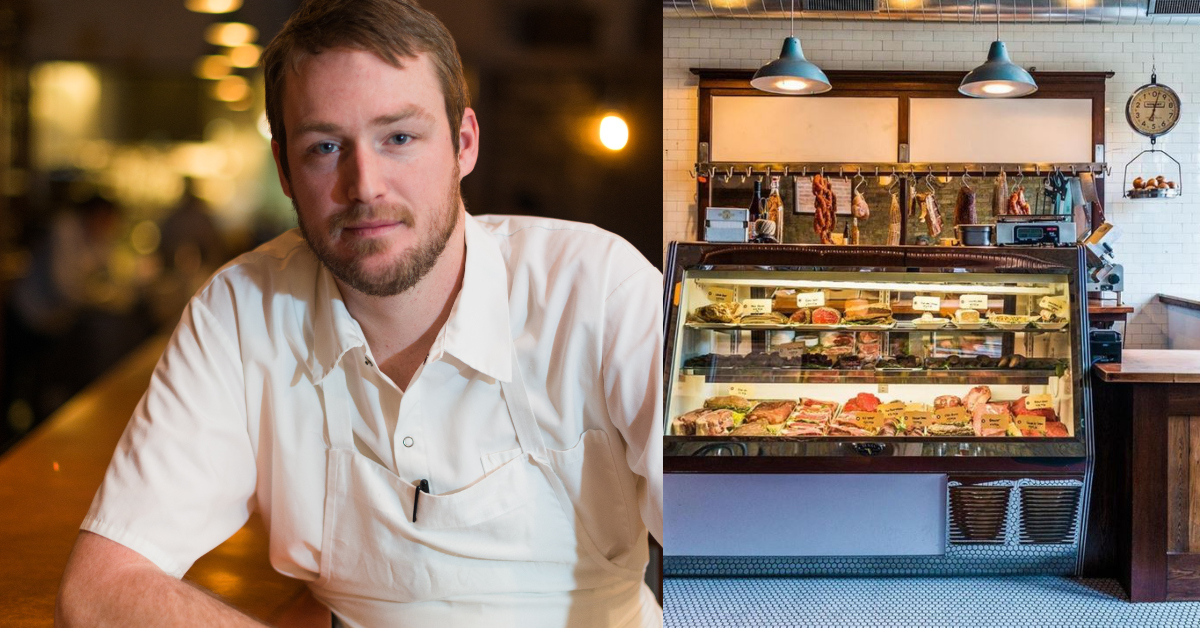 Brian Ahern has been cooking for close to 20 years. The Rochester, NY native chose to leave the College of Charleston after taking a job at a restaurant to make ends meet – and realized being in and near a kitchen was where he preferred to be. His mother urged him to attend culinary school, but his father, concerned about amassing student loans, advised him to instead head to New York City to find work with “the best.”

Listening to his dad, Ahern says, ended up being the best advice. He got a job cooking for the David Burke Group, where he started at the bottom and worked his way to a place of trust. Eventually, that meant running a restaurant at the chef de cuisine/sous level while also preparing countless TV, media, and photo shoots. His time there included stints at Fishtail, Fromagerie, and the café at Bloomingdales.

In 2010, he moved to a sous chef position at Scarpetta in Miami where he immersed himself in the world of pasta.

After a year there, he opened DB (Daniel Boulud) Bistro, also in Miami, as sous chef. It was there he met Jamie Finnegan, now his Boeufhaus business partner, and started dreaming bigger. “We knew we wanted to leave Miami because both my wife and I had a love/hate relationship with it and also, it was time,” he said. “So, we moved to Chicago, where Jamie is from, and started looking for a place. Chicago presented an opportunity, and with some of my family here too, it was an easy move.“

The two found their 100-year-old building, a former butcher’s shop in a Ukrainian neighborhood on Craigslist, and the rest is more or less history. Ahern said they let the space help dictate their concept: A French-German-inspired brasserie and beer garden with a large meat focus (think beef sandwiches) and a humble approach.

Boeufhaus -- Boeuf being French for “beef” and Haus being German for “house” -- opened in spring 2015 and by fall, had already received two stars in The Chicago Tribune, as well as earlier accolades by The New York Times which called it “exceptional,” “high-spirited,” and “delicious.”

The restaurant’s seasonally evolved menu prides itself on its reliance on sustainably and responsibly raised animals and artisanal house-made products.

Symrise caught up with Ahern between kitchen obligations to get his take on favorite ingredients, what he cooks on his days off, and the best advice he ever got.

Biggest influence: “My dad. He was always thinking outside the box, and taking us to new, small little places. Whether some obscure B&B, or some off the beaten path restaurant, those experiences opened my eyes to the small independent restaurant world.“

Where your cooking inspiration comes from: “I get inspired from what I see in the world, my wonderful staff and colors.”

Favorite ingredients: “Thyme. Also, high quality olive oil; it adds a depth of flavor to everything as well as a nice viscosity to finished sauces. I also use high quality vinegar pretty much everywhere, for acid and salinity.”

Utensils you can't live without: “A quality paring knife, a vita prep, cast iron pan, and chinoise … that’s all ya need!”

Trends you see in the industry: “It has become an ‘acceptable’ career path, but the workload hasn’t changed. That’s still surprising to young cooks. It's a lifestyle, a commitment. I love the natural wine movement happening all over.”

RELATED: Evan Milliman "The Mixology Sorcerer" on the Complexity of Spirits

What you cook for friends/family when 'off duty': “Roast chicken, every Sunday. I save the carcasses until I have six or eight, and then make a great soup.”

Favorite things on your menu: “Fried perch with sauerkraut puree and creme fraiche. It’s Great Lakes fish, so light and simple yet delicious.”

New ingredient you’re presently playing with: “I use a variety of ingredients and try and use them as many ways as possible. Fresh, roasted, pureed, vinegar, fermented, powder, are some favorites. I like to fold it into dough, etc.”

What you'd like to see more of in the kitchen: “Less pointless drama; it hurts many restaurants. I would like to see more people who understand that their work is a means to an end. The glass is half full. There’s light at the end of the tunnel.”

Thoughts on sustainability: “Sustainability … powerful word that's often times used improperly. As we continue to see a movement back towards the who, what, where, why of what we consume that word is thrown around too much. The movement is vital, knowledge is power.

It’s a recipe for disaster. When that happens, and what we eat on a large scale influences the eventual need for the medicines that ‘cure’ the diseases or ailments caused by our food, sustainability becomes irrelevant real fast. Be smart and proactive. YOU need to know where your food comes from, because no one else is going to tell you.”

Chef you’ve learned the most from: “David Burke. Learning how to balance both the day to day tasks of running a restaurant at a chef de cuisine/sous level all the while executing off site events were formative years. I am forever grateful for the opportunity he gave me to take on as much as I could, and oftentimes more, handle. He was demanding, but fair.”

Where you eat out when not at work: “Avec, Toons, Jimmy's Pizza.”

Chefs you admire: “Paul Kahan ([of One Off Hospitality] ---he stuck to his guns and has continued to grow while allowing his employees to flourish.”

If you weren’t a chef you'd be: “In music production doing back-end huge shows; the man behind the scenes or a carpenter.”

Where Boeufhaus may be five years from now: “Boeufhaus will still be Boeufhaus. A great little restaurant that cares about what it’s doing.

If we can grow, great. Growing doesn’t necessarily mean another Boeuf. I want to be associated with a place(s) that are rock solid. Repeat customers. Loyal customers. That only happens when you have quality people working. They are the magic. People who care, people who are engaged. Quality wins every time.”