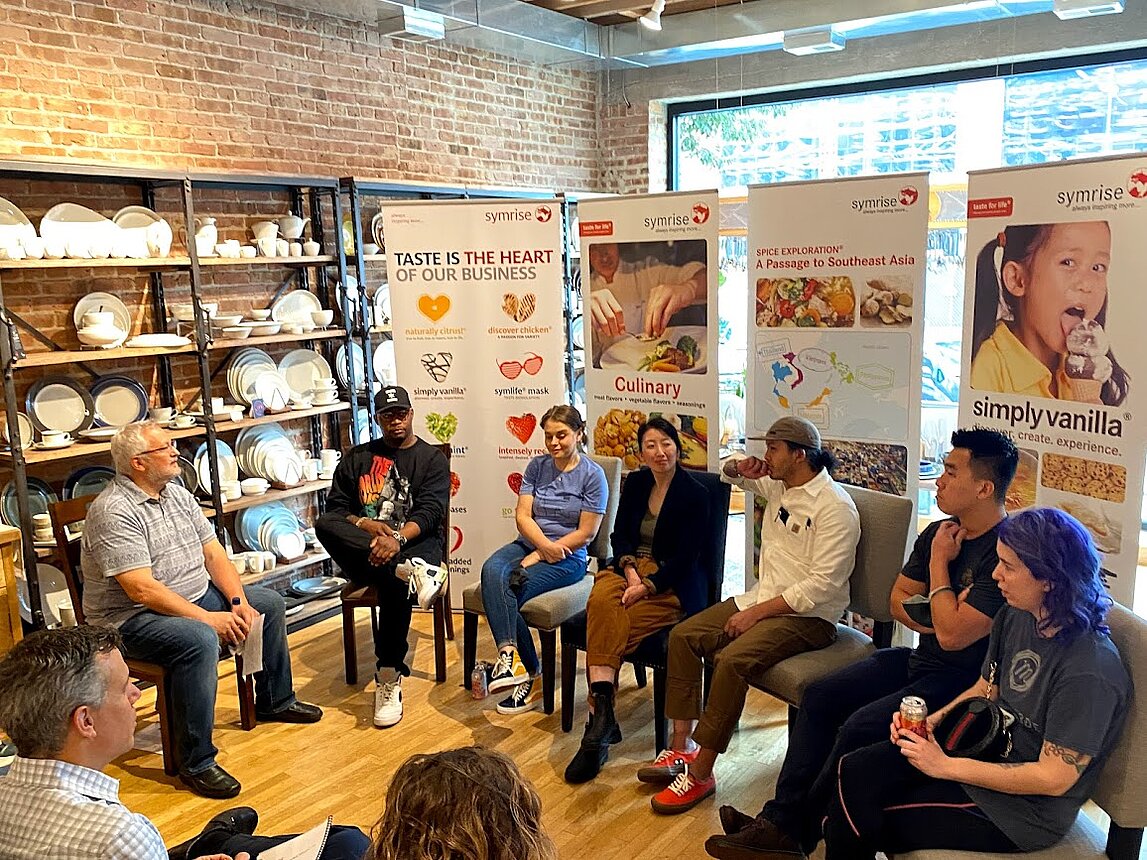 In connection with the StarChefs Rising Star Restaurant Week, Symrise hosted a private roundtable discussion in Chicago - home to one of the country’s most dynamic food scenes - with a small group of StarChefs Rising Star award winners. Symrise VP of Marketing and Consumer Insights Emmanuel Laroche moderated the wide-ranging discussion which focused on inspiration, balancing tradition with innovation and how chefs are responding to the dramatic changes in their industry brought on by the pandemic.

In attendance at the roundtable were a diverse group of restaurant professionals who exemplify Chicago’s creative yet approachable style of hospitality: Chef Dave Park of the Korean fine dining restaurant Jeong; mixologist Eric Simmons from the restaurant group What If Syndicate; Bailey Sullivan, the chef de cuisine at Monteverde Restaurant and Pastifico; pastry chef Natalie Saben from the restaurant group One Off Hospitality; and husband-and-wife team Tim Flores and Genie Kwon, chef-owners of Kasama.

To kick off the discussion, Laroche asked the panelists what inspires them when creating a new dish. Many, such as Bailey Sullivan, cited seasonal ingredients as a big part of their inspiration - but with some caveats. Natalie Saben pointed out that if you focus too much on seasonal ingredients, especially those with a short season, you are constantly changing your menu, which is labor-intensive and can be jarring for guests.

Seasonality as a guiding principle is one thing for chefs in California, but it is quite another for chefs in the Midwest. In Chicago, summer is short and winter can last until April or even May. Saben noted that she and her customers crave spring ingredients like strawberries and rhubarb much earlier than the locally-grown crops are available. This creates a dilemma for chefs: do they wait for the local fruits and vegetables or buy readily available produce from elsewhere? Saben notes that she changes her approach depending on how fresh and flavorful an ingredient is - doing less to ingredients at their peak. “When it’s fresh and you can get it from the farmer, you want to highlight that fruit just in their natural way; you’re going to put it on the plate raw or just tossed with something,” explained Saben.

The unpredictability of relying on seasonal ingredients is also an issue, as Genie Kwon explained. She noted that chefs as a whole are at the mercy of their purveyors and their purveyors are at the mercy of Mother Nature. This year, for example, the harvest has been poor due to weather and local farms are short-staffed - just like local restaurants - making it harder for chefs to source their ingredients locally.

A more reliable source of inspiration for many of the industry professionals in attendance is the flavors of a particular place, be it the place where their family comes from, the restaurant’s cuisine, or just Chicago itself. Honoring traditional Italian cuisine is the guiding principle at Monteverde, points out Bailey Sullivan, although she still tries to take a modern approach even to those traditional recipes. 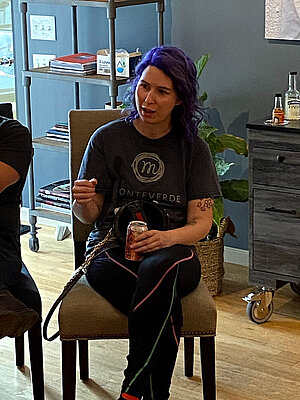 Dave Park’s cited nostalgia as his first source of inspiration - the flavors that his parents and grandparents cooked in Korea - and modernizing and elevating those flavors for a fine dining audience. Park evoked the scents and sights of Korea with his description of how the women in his grandmother’s apartment complex made certain foods, like kim chi or Korean bean paste as a community - powerful sensory memories that he draws on constantly in his cooking.

Similarly, Tim Flores and Genie Kwon draw on their backgrounds - her training in French techniques and his heritage - in crafting the menu for their bakery and modern Filipino restaurant. The key, Flores notes, is putting his own spin on a dish while maintaining some degree of familiarity. So, for example, he uses his dad’s traditional recipe for the sausage in Kasama's sausage, egg and cheese breakfast sandwich as a way of introducing customers to Filipino food under the guise of a familiar dish. Kwon pointed out that at breakfast, people seek out comfort and familiarity more so than at other meals. “People gravitate towards that thing that they want every single day,” like a blueberry muffin. So once an item goes on the breakfast menu, it will stay on - and at the same price - even if the price of the ingredients fluctuates throughout the year. And her desire to innovate is always tempered by the concern over whether a new item will sell.

Eric Simmons cited Chicago and its neighborhoods as his source of inspiration. Before a new restaurant opens, Simmons gets to know the community and sees what is popular and what is missing, so he can be the one to fill those gaps. Like Flores and Kwon, Simmons strives to balance familiar flavors with the new and novel. This might mean starting with a menu of classic cocktails when a new restaurant opens, tracking what drinks are popular, making adjustments and - once you have established some trust - creating inspired riffs on those drinks. 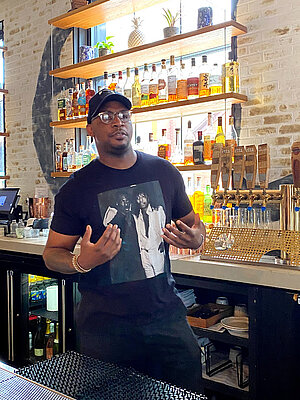 Laroche than asked the roundtable participants about the next step in the creative process after inspiration has hit. Many of the chefs take a very practical approach to actually creating  dishes for their menus. Tim Flores points out that he has to constantly ask himself how he can execute his vision with the least number of components possible. A simple dish executed perfectly does not need a lot of extra elements. He cites his growth as a chef for this streamlined approach. “If you get the right product, it is awesome the way that it is, you don’t really have to do too much.” Extra elements can hide inferior products, but making a single ingredient shine is much harder.

The discussion of technique and execution led Laroche to ask the chefs on the panel about their training. For years, culinary school graduates in America received classic, French-inspired training. But today, many chefs - particularly those with diverse backgrounds - rely on different techniques. Dave Park cited the difference between the French and Korean approaches to stock as an example. In Korean cooking, stocks are boiled which helps extract collagen and calcium from the bones, but also makes the broth cloudy. In classic French cooking, stocks are never boiled because clarity is the sign of a well-made broth. Park pointed out that there is a place for both techniques even in the same kitchen depending on your goal - a delicate subtle consommé or a rich, hearty stock. The other chefs chimed in with examples of things they are doing in their restaurants that depart from tradition, such as Bailey Sullivan’s use of Asian pickling techniques in her Italian restaurant.

Balancing respect for tradition with the desire to create and innovate clearly was on the minds of all the panelists. Eric Simmons joked that his pet peeve is being told not to do something. Indeed, some of his best ideas came out of a challenge or a refusal to accept the conventional wisdom. “When you’re not supposed to do it and then you do it, that’s the spark of creativity,” said Simmons.

Lastly, Laroche asked the panelists about the challenges they are facing at this historic moment in the restaurant and hospitality industry - a topic that simply could not be ignored. Each of the industry professionals on the panel talked about the current challenge of finding and retaining staff and the related desire to pay their staff a higher wage. But are customers ready to pay higher prices and accept the uncertainty that necessarily follows when supply chain are disrupted and restaurants have to compete for qualified staff? This challenge is especially difficult for more casual restaurants - where customers are sensitive to small upticks in prices. Bailey Sullivan captured the strangeness of the current moment when she explained that at Monteverde, they now serve dinner only four nights a week, but are serving more guests than ever. “Everyone is figuring out how to do more with less,” Sullivan explained.

Stay tuned for the next article in this series, as we dive deeper in to the round table discussion.

For more chef insights, subscribe to our newsletter HERE