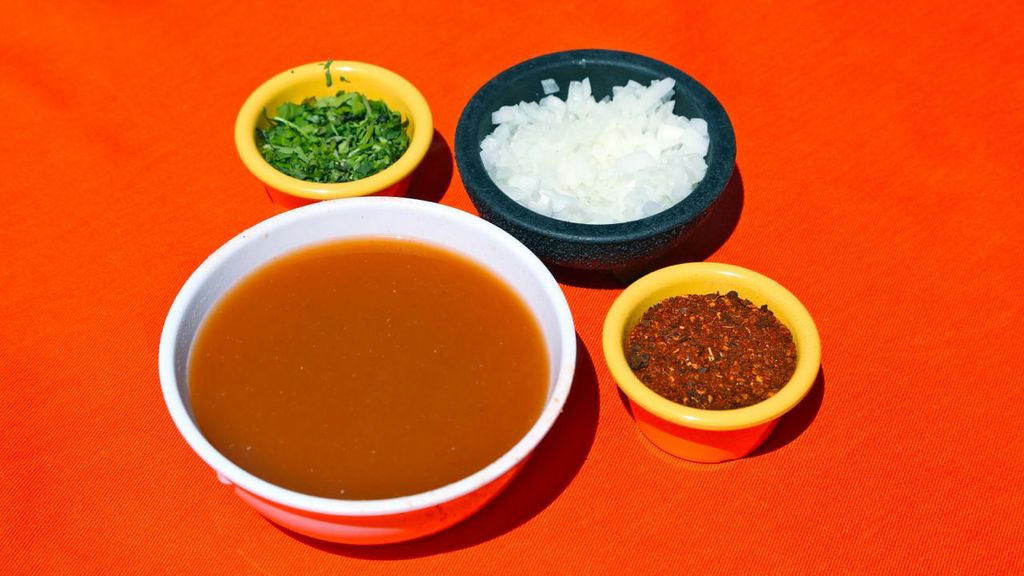 Jonathan Zaragoza traces his love for food to his family as well as to his heritage. At 7, he was insisting on making his own scrambled eggs at home and wanted to help his mom and siblings start dinner. By 12, he was cooking with his dad, Juan, assisting with his thriving underground restaurant which specialized in Birria Tatemada (oven-roasted goat), and later at his brick and mortar outpost in the Polish-Mexican neighborhood of Archer Heights, Illinois.

It was from their frequent father/son trips to La Barca, in Jalisco, Mexico, where Juan is from, that the two studied with Miguel Segura, a master Birriero (goat roaster) who had a 200-year-old recipe and no heirs to pass it down to.

Food, explained Zaragoza, serves both as a physical link between the generations as well as a tangible way to keep the family sustained which is partly why the recipe so appealed to them. Tradition, he stressed, is very important.

And so, it should come as no surprise that in 2007, when Birrieria Zaragoza opened its doors, Zaragoza, the oldest of four, stepped in to cook the specialty oven-roasted goat. Not only did he love the fact that he and his father were entrusted with the recipe, but he felt gracious that through that recipe, he got the opportunity to work with his family.

However, that hasn’t been his only culinary journey. Though he grew up in the family business, he spent his teens and early 20s working with some of Chicago’s best-known chefs including Frank Brunacci at Sixteen and Andrew Zimmerman at Sepia (2011-2012).

Hungry for more? Subscribe to the weekly In-Sights newsletter!

In 2012, at the ripe young age of 22, he was named to Zagat’s “30 Chefs under 30 list.” And by 23, he had taken the reins as executive chef at Masa Azul in Logan Square, a position he held for two years. He re-joined the family business in 2016 as executive chef where the only dish served is the aforementioned birria.

Along the way Zaragoza has done a host of collaborations and consultancies including a Hennessy commercial for Hispanic Heritage Month in 2017 and, also that year, helped start a Mexican food truck “Hecho en Dubai” in Dubai which included training the chefs. In addition, he’s had his share of TV appearances such as Travel Channel’s Bizarre Foods, Univision, Telemundo, Cooking Channel, WGN-TV, and Food Network. In May 2018, he was named a 2018 StarChefs’ “Rising Star.”

To his Twitter and Instagram followers, however, he is @goatboyintl where he calls himself “a professional cook by trade and an amateur cook by vocation.” Which seemed like the logical place to start for our Q & A.

Symrise: So, explain the handle please.
Jonathan Zaragoza: I got that nickname during my brief stint in culinary school. [He went to Moraine Valley Community College in Palos Hills, IL in 2008 for three months; dropped out, then Kendall College in Chicago in 2010 for another three months before also dropping out].

Birrieria Zaragoza opened its doors in 2007 and in 2010 when I was in culinary school, we had a few articles written about us. I was trying to keep a low profile there but one day during roll call, the chef instructor got to my name and said, “that name sounds so familiar.”

I kind of played it off like I didn’t know why the name sounded familiar to her. The next week we got written up in another article and she brought it in, slides it on my desk and goes “I know who you are, you’re the goat boy.” Then she upgraded it to goat boy international after yet another write-up. It stuck!

I kind of ripped it from him. But to me it means that he loves his job so much that he doesn’t think of it as a job per se, and that he doesn’t take himself too seriously. That’s me with food. I’m a goofball with a big heart but with a serious side as well and I think my food reflects my personality pretty well.

Symrise: How would you describe your cooking style?
JZ: I think my cooking style is very much Mexican grandma food. When I was a younger chef, I was trying to do too much as far as technique goes and over-conceptualizing dishes, whereas now I look to keep things a bit more traditional and honest.

All the groundwork for Mexican cuisine has been laid before me by my predecessors and my job is to honor them by not messing that up. I’ve always been surrounded by women that were constantly cooking, so it was very natural for me to pick up cooking as a hobby at an early age.

At 12, my dad taught me how to make the Birrieria Zaragoza birria recipe; it was then when I caught the cooking bug hard. By the time we opened in 2007, it was obvious to me what I would be doing for the foreseeable future. I just took what I was given and ran with it.

Symrise: What are some of your favorite ingredients to work with and why?
JZ: Even though my restaurant only does one dish on our daily menu, I cook with the seasons. End of summer has to be my favorite season as far as ingredients go, with the tomatoes and corn popping up. I mean, as a chef that cooks Mexican food for a living it’s kind of a no brainer. Although I do enjoy winter because that means I can make pozole!

Symrise: Do you see any trends towards any specific ingredients or cooking methods?
JZ: I try not to get involved with that whole “what’s in vogue” mindset when it comes to food, because I feel once you allow that to creep into your ethos, you inevitably lose your way and just start blending in with the herd. I learned to cook on live fire as a kid, and I feel like a lot of chefs are gearing their concepts towards that and I love that.

Symrise: Where do you get your cooking inspiration?
JZ: I get inspired by women -- the Doñas -- in Mexico that are on the street in tiny stalls selling whatever they felt like cooking that day. They set the bar for me on how good my food should be. That to me is who I look up to.

Symrise: What are some foodie Instagrams you follow?
JZ: I don’t really follow too many “foodie” accounts because most people’s aesthetic on Instagram looks the same to me with the overhead shots that look like they’re out of a magazine and it hurts my brain because that’s not real.

I follow chefs who are doing things that are interesting to me: @chazfortune is Charlie Welch an amazing chef (also my best friend). His reverence for the ingredients he uses, the knowledge he has acquired by working at amazing restaurants, and his technique is fun to watch.

Symrise: Where do you like to eat when you're "off duty?"
JZ: You can usually find me at Lula Cafe in Logan Square on my off days. Its menu is so simple and well executed. La Chaparrita Grocery is another spot that I frequent. It’s a small taqueria that transports me to a street in Mexico with their food; it’s my favorite.

Symrise: Who are other chefs you admire and why?
JZ: Andrew Zimmerman of Sepia and the recently opened Proxi is a chef I really look up to. I worked for him at Sepia for a brief time, but he has been an amazing mentor and friend throughout my career. Aside from being a Michelin starred chef, he’s a great person that genuinely cares about his people find myself wanting to follow in his footsteps.

Symrise: Tell me your take on Mexican cuisine; how has it changed?
JZ: I think Mexican food is evolving in the way it’s perceived. People are more willing to pay for an elevated Mexican meal without blinking. Mexican food has long bared the stigma of having to be inexpensive or doused in cheese and sour cream.

I think chefs like Rick Bayless and Hugo Ortega have really opened the public’s eyes to what Mexican food could be. Now my generation is pushing the envelope a step further and really digging into some awesome traditions and recipes and putting Mexican food on the global stage.