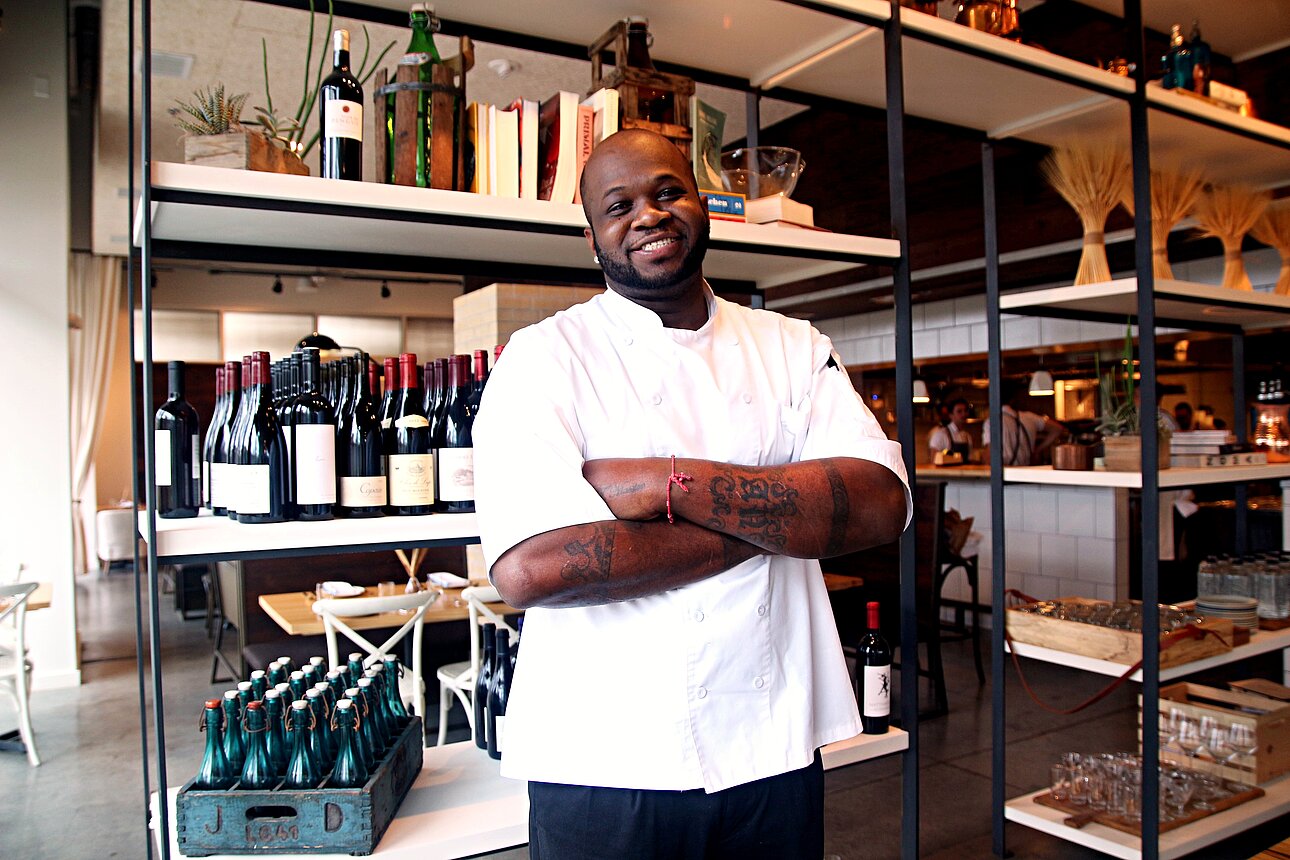 Tavel Bristol-Joseph began his culinary journey at a young age, making (and baking) cookies, cakes and pies with his aunt every Saturday. After moving, at age 17, to the United States from Georgetown, Guyana, he attended the New York Restaurant School. From there he went on to stints at The River Café in Brooklyn, Blue Fin in the W Hotel in Times Square and at the Braeburn Restaurant in the West Village.

In 2006 he moved to Tucson, Arizona when he joined Fox Restaurant Concepts, working for among others, Bistro Zin, North and Wildflower. It was there, in 2008, that he won the Chef Association of Southern Arizona Southern Pastry Chef of the Year Award. His talents further emerged serving as corporate pastry chef in 2009 at Hacienda del Sol and Zona 78 Italian Kitchen.

Stay ahead of flavor trends and creative concepts—subscribe to In-sight!

Moving beyond pastry, he took over as general manager of Zona in 2013. That’s when he began working with Chef Kevin Fink who he’d eventually follow, two years later, to Austin, Texas to open Emmer & Rye. Things have been going strong since. Bristol-Joseph, who once told Edible Austin Magazine, “every dessert has a story behind it,” sat down with us to talk ingredients, inspiration, and having a sweet tooth.

Symrise: When did you realize you wanted to be a pastry chef?
Tavel Bristol-Joseph: When I was in high school in Guyana, I took home economics for two years. Right after I graduated, I moved to New York. It was then that I feel in love with the craft and decided to enroll at The New York Restaurant School.

Symrise: What are your three favorite ingredients and how do you use them?
TBJ: Ginger, because you can use it in so many ways. My favorite is as a spice in a cake.
Cream cheese: I love to make different variations of cheesecake. At Emmer & Rye we make house-made cream cheese and it really elevates any dessert.

Lemon: It can really enhance any dessert and the best part is that you can use it in so many ways. The Monster Cookies at Henbit have lemon zest and it really enhances the flavors.

Symrise: Is there a specific ingredient you're particularly interested in now and why?
TBJ: I’m really focused on chocolate right now. I recently went to Columbia and spent some time on a chocolate plantation. I learned so much about the different varieties and flavor profiles. It was an eye-opening experience. It made me more conscious and aware of the different profiles and how to taste chocolate.

Symrise: If you had to choose: What do you like better -- savory or sweet?
TBJ: Sweet, of course! Sweet with savory notes is an even better option in my opinion.

Symrise: What's your favorite dessert on the Emmer & Rye menu and why?
TBJ: Definitely the bread pudding! I love that it’s a newer style of dessert for me and has so many different textures. It’s like having the motions of eating bread pudding but without being the classic heavy, dense, bread custard that we’re used to. This came to life through imagination, more than an example of something I’ve seen or been inspired by. I created this through an inspiration of emotions. Aerated bread pudding served with candied Texas pecans, chocolate brownie croutons and sweet tomato jam with dehydrated lemon zest.

Symrise: Tell me about your newest venture.
TBJ: We just opened Hestia in early December. I am the pastry chef/partner, as with all of our other concepts, Emmer & Rye, Henbit, TLV, and Kalimotxo. It’s a modern live-fire grill house. It features a 20-foot hearth where we’ve taken the open kitchen one step further with chef driven service.

Symrise: Best cooking (or baking) advice you ever got?
TBJ: It’s hard to choose the best advice. I’ve been surrounded by so many great people and been lucky enough to take little pieces of advice and carry them with me throughout my career. Years ago, I received advice that really resonated with me. Be aware of yourself in a kitchen. You work with so many people in a kitchen so this is very important.

When I was younger and first starting my career, I was reminded to taste food at every stage in preparation. It will help give you an understanding of how a dish is going to come together.

Don't forget the restaurant is a business, is by far the one I think about the most. It's not an arts & crafts school and as much as it's about being able to express your creativity it’s so important to be able to understand the business aspect of it.

Symrise: What food trend you're over or into?
TBJ: Honestly, I’m not a fan of trends. I understand that it’s natural for people to follow them but I am just not inspired by trends. I am inspired by emotions.

Symrise: How do you define innovation in the kitchen?
TBJ: I can only speak for myself but true innovation for me does not come from being in the kitchen, it comes from my time spent outside of the kitchen. I spend time thinking and building ideas in my head and then take them to the kitchen for tweaking to see how I can make those ideas even better. There are a lot of distractions and outside influences that can sway your emotions or ideas before they are even properly developed.

Symrise: What do you say to people who think they can't learn how to bake?
TBJ: I definitely wouldn’t believe them. Anyone can learn to bake. As long as you can follow a recipe and have the want to learn, you can do it! That's what life is about. Willpower makes you do anything you want to.

Symrise: If you could create a dessert for anyone (alive or dead), who would it be and what would you make?
TBJ: I would have loved to create a dessert for my father. He passed away when I was 7-years- old and I was his only child. I cook though emotions and life experiences and I would have loved the opportunity to show him the man I’ve become, personally and professionally. I’m sure he would have been proud. I was so young when he passed that I unfortunately, didn’t know him very well. But I would give anything to have more time with him and be inspired by flavors he loved and to create a special dessert just for him.

Don't miss our next interview, subscribe to our Weekly Newsletter!