Nordic chefs are finally getting their day in the sun. And at the moment, there is none hotter than Gunnar Karl Gíslason of Reykjavík, Iceland’s Dill who took the main stage at the 9th Annual StarChefs International Chefs Congress to talk about “The New Nordic Cuisine of Iceland.”

Gíslason admitted that when he opened Dill in 2009, he planned to import ingredients from all the Nordic countries, but due to the financial crisis, he couldn’t afford it. His focus had to be on Icelandic products only. What he initially thought would be a hindrance has instead served him well, allowing him to drill down to the hyper local level and use wild Icelandic plants and artisanal producers.

Gíslason is now committed to indigenous ingredients like berries and dried fish, and traditions, like pickling. Tradition is the operative word, which is ironic, because the phrase “New Nordic” often conjures up the idea that there has been a departure from, rather than a reunion with, old world cooking. Gíslason’s style is to use familiar flavors in new and surprising ways, while still embracing the roots of his ancestors. In fact, he says he’s so committed to the past, his old Nordic cookbooks which he uses for inspiration are “falling apart.”

His mission, he explained, is to use time-worn traditions as a “creative catalyst” for new dishes. Take dried fish. There’s nothing more ancient in Iceland than that — the Vikings ate it in place of bread. But how to transform it and give it a spin attractive to modern day diners? Despite being a “hard ingredient to figure out what to do with.” Gíslason shredded it down in a blender and mixed it with burned butter and white ale vinegar and plated the emulsion in a minimal presentation with dill oil (what else?). Next, he combined pickled seaweed (in herbs and house made vinegar) and berries and served it with “small, beautiful parsnips” that had been salted and fried. He also shared the recipe for Salted Cod Chips with Pickled Angelica Cream. 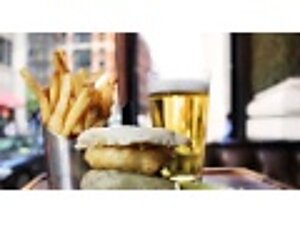 In many ways, Gíslason was the poster chef for the authentic theme of the conference with his back-to-basics practices of pickling and fermenting and frequent use of vinegar. Pickling in Iceland, he said, is especially important because of the short summer season and told a rapt audience that he “pickles his ass off.” He even said he doesn’t let any part of his ingredients go to waste, citing his use of the leaves and the stalks of kale in one recipe.

Gíslason did share one practice that stood out from the other chefs: In Iceland, salted and dried horsemeat can be substituted for beef. Folks can read all about that and other dishes in his new book, North: The New Northern Cuisine of Iceland.

Good Libations Beyond the Plate
❤0
back