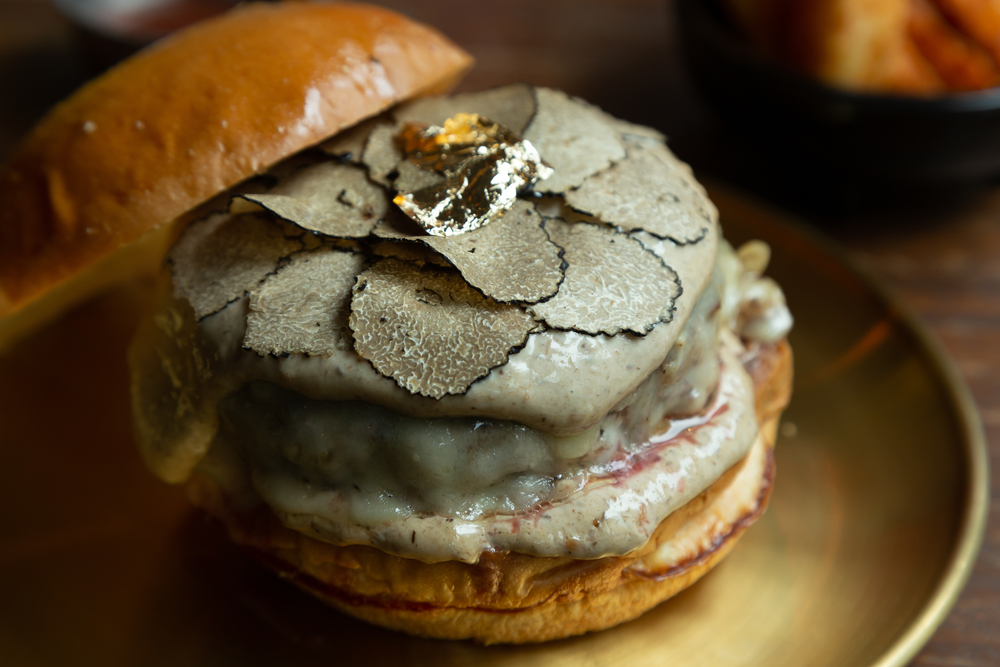 When looking for condiments to top your burger, look past ketchup and relish and instead, reach for the peanut butter! At least, that’s what some chefs are suggesting as restaurants innovate and bring new burgers combos to the table for adventurous consumers. We rounded up some of these restaurants across the world currently offering the wildest burgers and pushing the limits on what “should” be burger toppings in 2021...

Get the latest culinary information delivered to your inbox - CLICK HERE!

Sometimes you need to kill two birds with one stone when dining out and get your entrée and dessert combined into one dish for efficiency’s sake. If you really, really like a savory and sweet combination for dinner, McGuire’s Irish Pub in Pensacola, FL has you covered.

Billed as a steakhouse, the restaurant has gained notoriety by adventurous tourists looking for the infamous McGuire's Terrible Garbage Burger self-described on the menu as “Some of everything - it's absolutely disgusting.” The toppings on the burger are subject to change, but the most well-known version is a burger turned sundae with a 14-oz. Black Angus patty topped with vanilla ice cream, hot fudge, red cherry, and lettuce, tomatoes, onions, pickles, and fries served on the side.

Known for its extravagant and expensive offerings, Serendipty3 in New York City is all about over-the-top luxury in everything from their towering sundaes and foot-long hot dogs. They hold five Guinness World Records for these outlandish creations including for their Golden Opulence Sundae, Luxe Milkshake, and Le Burger Extravagant, all still available on the menu but must be ordered in advance. In 2013, Le Burger Extravagant was named the most expensive burger in the world at $295 with white truffle butter, a blini, crème fraiche, and caviar, on the bun, and Japanese Wagyu beef infused with white truffle butter, James Montgomery cheddar cheese, black truffles, a fried quail egg, inside. And of course, the top is dusted with gold.

What happens in Vegas, stays in Vegas, which is especially true for a new gold-encrusted burger only available in Sin City. Slater’s 50/50 features an over-the-top menu for Vegas’ high rollers who want something fried and cheesy or need a milkshake topped with a whole slice of cheesecake after a night on the slots. However, the burger menu goes above and beyond with towering sandwiches and the option to add a Wagyu patty for just an extra $5. The Whale Burger special is a $100 burger that comes with a fried lobster tail, one pound of wagyu beef, three slices of gold dusted “billionaire’s” bacon strips, truffle cheese, arugula, bacon jam, and roasted garlic aioli, sandwiched between a gold-dusted brioche bun. It also includes a 375-milliliter bottle of Veuve Clicquot Yellow Label Brut Champagne.

Consumers ordering from a restaurant with “Zombie” in the name already expect a unique experience from their dining experience. Zombie Burger & Drink Lab in Des Moines, Iowa, is a horror-themed restaurant with inventive names taken from classic horror movies and tropes for their burgers, from Flamethrower, Planet Terror, and Helldorado.
One that stands out as their craziest creation is the They’re Coming to Get You Barbara burger which features two whole grilled cheese sandwiches as the top and bottom bun, burger patty, American cheese, caramelized onion, bacon, and Zombie sauce.

RELATED: The Rise of Birria in the United States

While some places like to offer one signature over-the-top burger to put them on the map, other restaurants decide to build their business around the idea of “how wild can we get?” One of the latter places is Backdoor Grill in Steamboat Springs, CO, who offers an array of crazy burgers as well as lots of fried options and tamer salad and sandwich menus for those afraid to smear peanut butter on their burger. Their burger menu includes:
• Lucky 13: 13 beef patties, 13 slices of American cheese
• Wonka: chocolate covered bacon, funnel cake fries, cheddar, peanut butter and strawberry jelly
• Dirty Harry: peanut butter, fried egg, bacon, hashbrown, cheddar in between a glazed donut with powdered sugar

Although a list of crazy burgers from around the world is undoubtedly dominated by the United States, the United Kingdom comes in with strong contenders at Smokehouse BBQ & Grill in Wakefield, UK. According to their website “heat’n’meat” are their passion which shows on their menu full of BBQ classics and modern takes. In addition to the Burgers, BBQ Combos, and The Grill sections of their menu that are already packed with indulgent meat dishes, they take it a step further with the aptly named OMG Burgers section. This includes:
• Big Boi: double hand-pressed burger patties covered in melted cheese and slow-cooked pulled pork in Smokehouse BBQ sauce.
• Pizza Burger: double cheeseburger with bacon, pepperoni and homemade pizza sauce wrapped in freshly made pizza dough and baked in the oven until golden brown.
• Yorkshire Pudding Burger: double patties, mozzarella cheese, beef brisket, fried onion between two Yorkshire pudding, served with homemade beef gravy

Typically, when consumers go to fast-food restaurants, the aesthetics of their food are not top-of-mind. Burger King Japan agreed that looks can be deceiving and introduced The Cheese Ugly Beef Burger in 2020, with the intention of focusing and elevating flavor over uniformity and appearance. It became a best-seller, and in response, in April 2021, Burger King released another “ugly” burger – The Teriyaki Ugly Beef Burger. This sweet and sour burger features a signature shredded four cheese mix (gouda, Egmont, mozzarella, and cheddar) baked onto the bun, teriyaki sauce, condiments, pickles, lettuce, charred onions, and red miso paste.

The worldwide bao craze has found a heart in France with Bao Burger in Paris taking “buns” literally to replace the typical wheat, sesame seed bun on burgers with a soft, steamed alternative. Their menu is packed with baos filled with everything from avocado, to salmon, to Nutella, and although a more traditional-looking burger option is also on the menu, the stand-out is the unique-looking Burger Bao that turns the one-handed bao treat into a two-handed meal. These burgers are made with a distinctive white fluffy steamed bao bun with black sesame seeds dusted on top. Inside, there is a choice of beef, fish, or chicken, raw vegetable slaw, and condiments.

Beyond the Plate
❤1
back