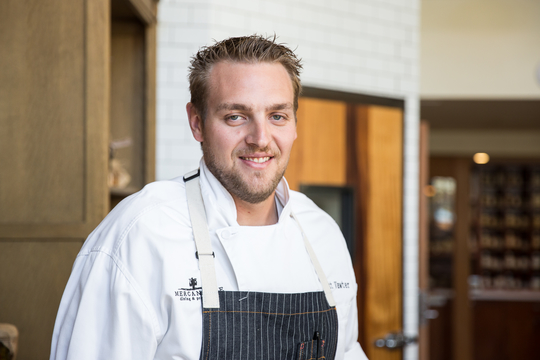 Award-Winning Chef, Matthew Vawter, Shares The Techniques Behind His Success

Ask Matthew Vawter to describe his cooking style in a couple hashtags, and you’ll get “seasonal, ingredient driven, technique driven, comforting, and approachable.”

The Chef de Cuisine/Proprietor of Denver’s Mercantile likes using ingredients at the peak at their freshness and says the restaurant is big on prolonging the seasons. That means lots of pickling, canning and preserving, everything from fruits and vegetables to meats and cheeses.

“We have a short growing window in Denver,” he says, “So it’s important to use those preservation techniques to save the season.”

Vawter knows from which he speaks. A Colorado native, he’s been employed in kitchens since he was 14. He caught the culinary bug working the line at The Claimjumper, a breakfast joint in his hometown of Summit County, before moving on to higher caliber restaurants.

He worked at The Keystone Ranch with Chef David Welch before landing a culinary apprenticeship – while still in his junior year of high school – at Colorado Mountain College Culinary Institute. From there it was onto some of the state’s best restaurants, including a five-year stint with Vail Resorts.

In 2007, he moved to Denver to work with Chef Alex Seidel at Fruition Restaurant, where he rose from garde-manger to chef de cuisine, winning accolades along the way. He was named to Zagat’s “30 Under 30” in 2014 and became a chef-partner at Mercantile Dining & Provision in Union Station in 2014. In 2017 he was named a StarChef Rising Star.

Vawter says he was inspired to cook by his grandmother who he constantly observed, and more often than not, helped, in the kitchen. Together they watched the Discovery Channel’s “Great Chefs of the World” and shopped for ingredients together.

He admits his love of eating was a component as well. “I always enjoyed the act of hospitality – of hosting people and creating that experience of seeing people happy when they’re eating,” he says. “To me, it’s always been about more than eating – it’s the whole package of ambiance and food.”

The more he got into the industry and saw chefs at work, the more he knew he wanted to be in this world. He was, after all, reading (and basically studying) cutting edge chefs in Food & Wine Magazine at 14 – and was hooked.

Fast forward to now where among the essential ingredients in his kitchen are vinegar and salt. “They bring enhanced flavors and balance,” he says.

The sense of “story” is also critical to the way Vawter operates – and thinks about food. Because Mercantile is both a restaurant and a market, he and his staff set out to create an experience – more than simply a plate of food – for their guests.

The restaurant, for those who don’t know its background, is the culmination of Chef Seidel’s passion to create approachable, top quality food without the pretense (and price tag) of fine dining. He does this thanks to Fruition Farms, a farm outside Denver that he bought in 2009.

On the farm: Heritage Breed hogs, Italian Honey bees, chickens and a fruit and vegetable garden. The place is also home to East Fresian dairy sheep that serve as the foundation of the artisanal sheep’s milk creamery, the first of its kind in Colorado.

More Chefs To Keep On Your Radar

The restaurant’s mission, explains Vawter, is to execute the flavors and techniques of cooking that are tried and true and that are were here long before chefs tried to perfect food on a higher level. It’s simple eating done right, the way Vawter’s grandma may have done.

Though it’s a “tough call,” Vawter’s favorite dish on the menu is the Spanish Octopus with confit veal sweetbreads, baby carrot escabeche, and black garlic aïoli.

At home, his go-to dinner is usually something with vegetables (his wife’s a vegetarian). “I make a vegetable coconut curry which whatever vegetables we have on hand; it’s super versatile and super quick,” he says. Ditto for breakfast – which he cooks every morning – usually a veggie omelet for himself and his daughter.

When he has time to eat out in town, he likes Beast and Bottle for brunch; Williams and Graham for drinks and for dinner, either Hop Alley or Señor Bear.

Chefs he has his eye on: Blake Edmunds from Señor Bear and two pastry chefs and fellow Rising StarChef alum, Gonzo Jimenez and David Lewis of Miette et Chocolat in Aurora, CO.

As for the best career advice he ever got? Vawter says Seidel someone once told him it’s amazing what you can accomplish in a year. So, once a year he takes stock of his goals. “It’s really true what you can do in a year,” he says. “In some ways it’s a short period of time but it’s also a long period of time.”

His other take to heart words of wisdom? “If you assume everything is hot in the kitchen, you’ll never get burnt.”

For More Culinary Inspiration, Subscribe To The In-Sight Newsletter!

Beyond the Plate
❤2
back