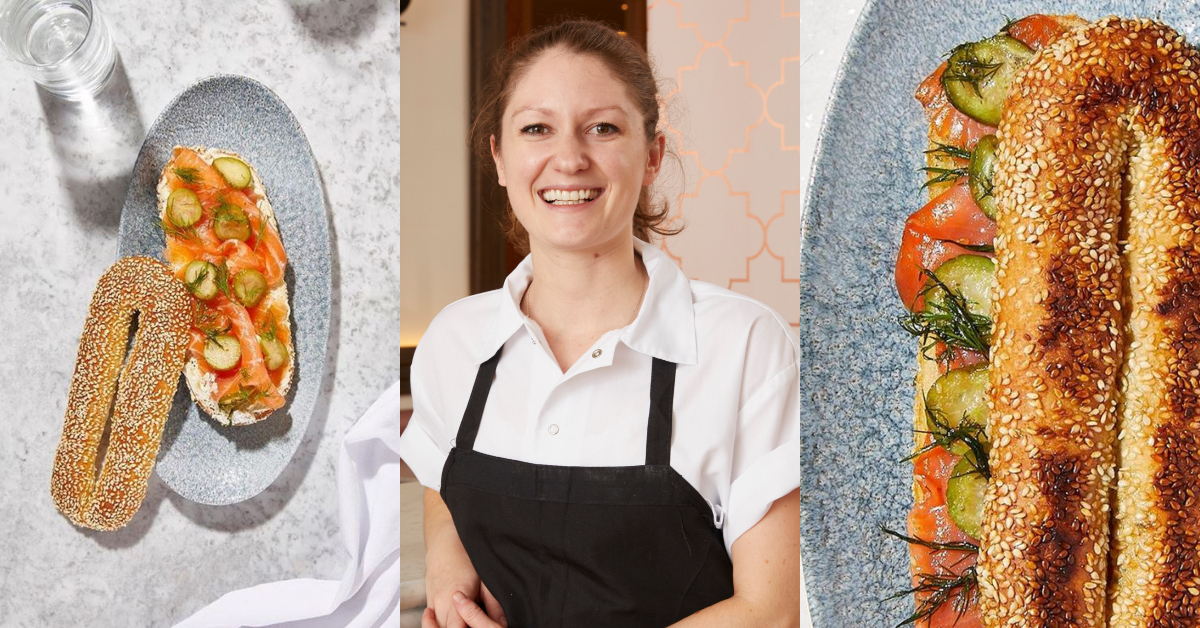 Camille Cogswell grew up around food – both her parents cooked – and she said her mom made it a point to have a homecooked meal on the table every night, often with Cogswell helping. But it wasn’t until high school when she took a culinary arts class that she truly fell in love. “That’s when my interest really blossomed,” she said. In fact, after completing two years of classes – her school didn’t offer any more – she was granted permission to do an independent study to work at a local bakery, further fueling her passion.

From there she expanded her experience in pastry in Chapel Hill, NC and Portland, OR before going on to study baking and pastry arts at The Culinary Institute of America in Hyde Park, NY where she landed a coveted externship in the pastry kitchen of Blue Hill at Stone Barns in Pocantico Hills, New York.

After graduation, the Ashville, NC native moved to Manhattan where she further honed her skills at the Michelin-starred NoMad New York before relocating to Philadelphia in December 2015 to become the Pastry Chef at Zahav. It was there she became known for combining her own Southern flair with Israeli ingredients and techniques, resulting in nostalgia-inducing comfort food desserts with an international twist.

In 2018, the then 27-year-old was named “Rising Star Chef of the Year” by the James Beard Foundation— only the second pastry chef in the 28-year history of the awards to do so (the other being Christina Tosi in 2012). That was also the year she was tapped to lead the opening of K'Far, an all-day Israeli cafe and bakery by the team behind Zahav.

The following year, in December 2019, Cogswell was named to the Forbes “30 Under 30” list in the Food & Drink category.

Symrise caught up with her to get her thoughts on her must-have cooking utensil, her favorite desserts and some of her go-to Philly restaurants.

RELATED: Evan Milliman "The Mixology Sorcerer" on the Complexity of Spirits

On her cooking philosophy: I’m not trying to change anyone’s life with food; I just want people to feel nourished and welcome and comfortable but also invigorated and excited by the food that they are eating.

Favorite ingredients: It’s always changing with the seasons. Plus, I’m always trying to gain as much exposure to new ingredients as I can. But two I particularly like are sachlav, basically the ground root of the orchid plant which is well known in Israel. It has a natural starchiness and a beautiful flavor but also has this great thickening power. In Israel, a lot of people use it to make a drink called sahlab which is basically like a thin hot pudding topped with shaved coconut and ground peanuts and rosewater syrup. I also like quince. Quince is a super magical fruit that has a really interesting spongey hard texture when raw but when you cook it over a long period of time, you get this incredibly floral, lightly spiced aroma and flavor.

Under-utilized ingredient: One ingredient I’ve been digging lately [this interview was conducted in January 2020] is turnips. There are so many different kinds and because they can have a super funky flavor, they can be a little bit of a turnoff. But turnips are used a lot in Israel and are really cool in that they can be refreshing or they can be earthy and creamy and more pungent and milder. I love that there are different flavor profiles to them.

Cooking utensil she always reaches for: A small offset spatula. It’s great for when you’re working on the savory or pastry end of the kitchen and plating dishes. I find myself reaching for it to pick up specific delicate items or to turn something over. It’s very much a multi-use tool.

Dessert she’s most known for: The Malabi custard at Zahav. It's an Israeli milk pudding flavored with sachlav that’s topped with whatever fun, delicious ingredients are around at the time. It’s a really nice, light blank canvas for us to add beautiful seasonal toppings to. At K’far, it’s the date molasses which is served with a sweet hazelnut ducha [an Egyptian condiment], a mixture of nuts and spices and seeds and herbs. Right now, we’re using candied crushed hazelnuts and mixing it with sesame seeds, cinnamon and coriander and then bruleeing pieces of grapefruit on top.

Favorite desserts: Strawberry ice cream. I’m really simplistic. I also love pies, particularly fruit pies. For me, summer fruit is the best – berry and stone fruit in particular. I tend to gravitate towards refreshing foods rather than super rich and luxurious. Which means I’d rather eat a fruity creamy combo as opposed to a caramel chocolate layered brownie bomb.

Where you’ll find her eating out in Philly: Tai Lake, Pho 75, Los Gallos, Neighborhood Ramen, and Kalaya. There’s so much great food in Philly and so many places in town that we love and support. For us [Cogswell is engaged to Amis chef Drew DiTomo], it’s important to support the local community. The dining scene here is incredibly diverse and the passion everyone has is inspiring. Philly has a really welcoming and intimate and lovely food community.

Guilty pleasure: I’m a big sucker for Pringles. I also love the little mini chocolate covered doughnuts in the bag – Entenmann's or Tastykake – and usually anything that’s cheese flavored. That fake cheese? I love it.

Beyond the Plate Sweet Talk
❤0
back