From its humble beginnings in the P.S.11 schoolyard, Smorgasburg has grown into a multifarious culinary mini-mecca where one can sample cuisines from every borough of New York City and countless countries around the world. Smorgasburg is an all-food flea market held in two locations in Brooklyn. The Williamsburg Smorgasburg is held on Saturdays in East River State Park and the Brooklyn Bridge Park Smorgasburg is held on Sundays at Pier 5.

Between the two locations there are 100 hand-picked food vendors. Even if you fast for a day beforehand, you will need more than one weekend of rapid-fire tastings to enjoy all of the amazing food Smorgasburg has to offer.

Gooey butter cake is a pastry that originated in St. Louis, Missouri. Matt Swantson has brought this indulgent treat to New York via Gooey&Co. Matt has developed four versions of gooey butter cake: original with butter and cream cheese, chocolate, maple carrot with ginger and cardamom, and banana with dark rum and cinnamon. Daily specials inspired by seasonal ingredients are offered at Smorgasburg, one of which was the original gooey butter cake topped with autumn spiced pluot chutney.

At People’s Pop you can watch as your shaved ice treat is chipped off of a block of ice the size of an oven. Or you can pick from a variety of ice pops with flavored with peach sweet tea, plum basil, and spiced pear.

Whether you travel by subway, ferry, or Uber, Smorgasburg is well worth the trek to Brooklyn. Unfortunately, Smorgasburg has closed for the 2014 season. But the good news is the open call for new food vendors for the 2015 season has begun. If you have ever dreamt of developing a street food concept based on your abuela’s secret chicharron recipe or your famous fried cheesy pate choux (sure to become the new tater tot), now is the time cook your dreams into reality! Apply online and you could be the newest addition to the coveted lineup of Smorgasburg food vendors. 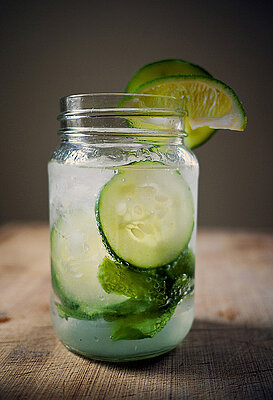 The second good news is Smorgasburg founders Eric Demby and Jonathan Butler have recently grown their Brooklyn empire to include Berg’n, a beer hall and food market in Crown Heights. Berg’n is open Tuesday-Friday 4-7 pm for happy hour and 10am-4pm on weekends for brunch.

If you haven’t already, the time has come to pick out a new calendar for 2015. Before you hang it in your home or office flip to April draw a big circle around the weekend of April 4th and 5th marking Smorgasburg’s opening weekend for the 2015 outdoor season.

See you at Berg’n for happy hour!

John von Pamer/Berg'n The credit for Brooklyn's status as an international brand may belong to many players, but few represent and commodify the borough quite like Eric Demby and Jonathan Butler.

IN 2012, when critics began calling Braden Perkins's new Paris restaurant, Verjus, "très Brooklyn," the Boston-bred chef approved because he knew what they meant. "It was actually quite a useful way to describe something that had shed adornment and pageantry and replaced it with a relaxed and honest approach," Mr. Perkins said.

Here's Your New Cronut: Why the Bruffin Will Own New York

It's been a while since you went crazy for cronuts, cretzels, and cr'nishes, so this news will make you gastronomically giddy: there's a newcomer to the trendy New York City hybrid food scene, and it should move straight to the top of your must-eat list. It's called the Bruffin .

fullscreen As Smorgasburg continues to grow each year, it's tough keeping up with all of the new vendors, especially when you're in the thick of the crowd that forms each Saturday in Williamsburg. That's what makes the perky white flag atop newcomer Mofon·GO's stand so convenient for navigating the crush when you can barely see a few feet in front of you.

Your next video will start in Aug. 27 (Bloomberg) -- Berg'n Co-Founder Jonathan Butler discusses the company's Brooklyn beer hall and it's grand opening today. He speaks on "Bloomberg Surveillance." (Source: Bloomberg) This text has been automatically generated. It may not be 100% accurate. ZIP is required for U.S.

Beyond the Plate Culinary Chronicles
❤5
back