In the history of food, the tomato has suffered over 200 years of discrimination.  Originally grown only for decorative purposes, the lack of education and rise of superstitions kept this fruit out of consumer hands for generations.

A native to southern and central America, the tomato can be traced as far as the Incas in the Andes. History points that the migration of the Incas to central America and Mexico, carried the seeds and can be traced back to being cultivated to as early as 500-700 AD by the Aztecs. “Xitomatl” or “Tomatl”, were the original names meaning “swollen or plump fruit with a navel” in Nahuatl, which is where the word “tomato” evolved from. To Aztecs, the tomato or jitomate was a symbol of good fortune rather than a forbidden fruit. The seeds were said to be an aphrodisiac and were thought to increase fertility, making it a common gift for newlyweds.

Cortez in 1519, is generally credited to have brought the seeds over to Europe from the Americas, though history can only date the cultivation in Italy as early as 1550 and 25 years later in Britain. The earliest publication using tomatoes in a recipe was found in a book in 1692 by an author from Naples.

However, throughout history, the tomato has gotten a bad reputation as the forbidden fruit. It was said to be poisonous and would turn blood into acid. It was often associated with witchcraft or lycanthropy (the summoning of werewolves) due to its uncanny resemblance to deadly nightshade. Ironically, the fruit is actually the only part of the tomato plant that is not poisonous. Even the poisonous fruit theory was eventually turned when it was shown that rich people used plates made of pewter in the early 18th century and would display the tomatoes on them, which due to its high acidity, would leach out lead, but of course, the tomato got the blame and not lead poisoning.

Monthly Mixology: The Art of Tequila

Eventually the tomato made its way back to the Americas, which has been traced as early as the American Civil war, and has since then been a staple ingredient in kitchens world wide. In 1897, Joseph Campbell came up with the idea of condensed tomato soup, which would later be immortalized by Andy Warhol.

California alone in 2013 produced over 13.6 million tons of tomatoes, which is about 94% of all tomatoes grown in the USA. 96% of tomatoes used in canned tomatoes in the USA come from California. Three quarters of all tomato production in the USA is consumed not as raw ingredients, but in its processed form: pizza, pasta, salsa, ketchup, tomato juice and canned tomatoes. Another larger power player in the world’s tomato industry for processed foods is China, with most tomatoes being used for ketchup.

Monthly Mixology: A Lesson on Mezcal

Over 100 tons thrown during La Tomatina in Bunol (Valencia), Spain, the world’s largest food fight throwing tomatoes in one hour has been annual since 1945, with a slight break under Francisco Franco but resumed in the 1970s.

Of course when pertaining to mixology, the tomato itself is a versatile ingredient that can be easily paired with vodka, tequila, gin, beer, whiskey, pisco, cachaca, shochu and white rum. It can be used in harmony with herbs such as basil, rosemary, oregano, tarragon, thyme, cilantro and mint or other ingredients such as onions, pickles, limes, lemons, and grapefruits. The tomato is no longer a forbidden fruit, but rather a valued ingredient.

Classically, the tomato is most known for its use in the bloody mary, but since the boom of Latino ingredients and flavors, the emergence of the michelada has been growing. Companies have even canned the michelada for commercial use. The michelada is simply a beer cocktail that utilizes either Clamato and/or a mixture of lime juice and Valentina sauce with a spicy rimmer and is very popular in Latino countries. 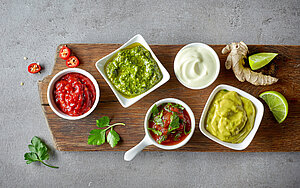 The recipe below is my take on the michelada:

Rim a tall pilsner glass with Junior Merino Aleppo Pepper & Lime Rimmer. In a mixing glass, pour in all the ingredients except the beer. Stir with a barspoon. Top with lager and sit gently. Pour mixture into the rimmed pilsner glass.

Nonetheless, today, the tomato is not only a Latino favorite and no longer the forbidden fruit, but it's the most consumed fruit in the USA and is eaten by millions of people globally.