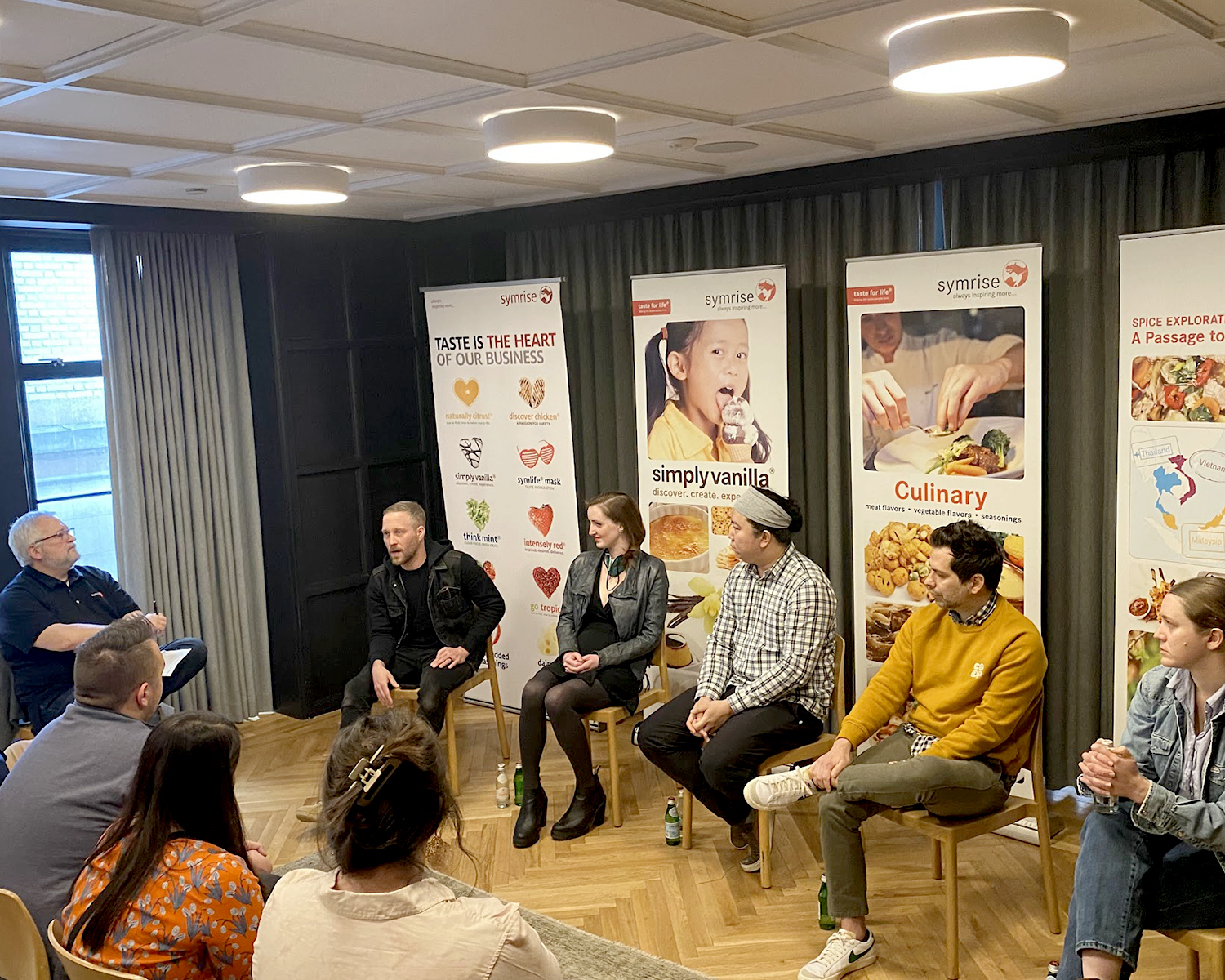 With its contrast between cozy, walkable neighborhoods and high-stakes international politics, Washington, DC is a dynamic place to live. It’s also an exciting place to eat, and the city’s culinary scene reflects this tension between regional charm and worldly sophistication.

Keeping in mind that the “DC-Chesapeake” in the event’s title evokes a larger coastal region outside of DC proper, Symrise’s VP of Marketing and Consumer Insights Emmanuel Laroche kicked things off with a question about location: what, exactly, constitutes Mid-Atlantic cuisine? Johnny, who grew up in Baltimore, resists tying it to any one style of cooking, disagreeing with those who overidentify DC with Southern American food. He also rejects the idea that crabcakes, perhaps the area’s most famous dish, deserve pride of place: “It doesn’t represent the entire region very well. Big deal, so you put mayonnaise in crab meat and fried it.”

For more on the latest culinary trends, subscribe to our weekly newsletter HERE

Given the meld of cultures in the area, local ingredients may be a more authentic expression of Mid-Atlantic culinary identity. For Gemma, a DC native, there’s no denying the influence of the landscape itself, with the local farmland and waterways commanding respect from food producers. Rob takes things a step further, describing how the locally sourced vegetarian menu at Oyster Oyster attempts to incorporate ingredients that may have grown indigenously in the region before being supplanted by more efficient cash crops.

Of course, limiting the range of available material can pose a seasonal challenge. Because Oyster Oyster only sources ingredients from the corridor between North Carolina and Central New York State, Rob mentions the need to approach dishes with a beginner’s mindset, staying open to the possibility that techniques that worked for summer fruits could work just as well for a winter surplus of cabbages. And although spring “brings fruit pouring through the doors,” winter also presents a challenge for Annie, who relies on local savory herbs and dehydrated frozen flowers to add an edge to the Mediterranean-inspired desserts at Tail Up Goat and Reveler’s Hour.

When Emmanuel poses the question of what makes DC’s restaurant scene unique, it initially seems easiest for chefs to gauge how far the city has come. Gemma points out that steakhouses used to dominate the District’s fine dining scene and that it was almost impossible to find a vegetarian entree. To Will’s mind, things have changed thanks to population growth in DC over the last 20 years, resulting in a more diverse pool of culinary talent and a class of diners who want to support local chefs. This has created more nuanced dining options: “now you have a place that’s not just a Thai restaurant but a Northern Thai restaurant […] Diners want and are willing to experience more specific regions of a country.” In this regard, several of the panelists also point out DC’s surprising abundance of international fast-casual dining options, including Indian at Rasa, Chinese-Korean at Chiko, and Ethiopian at Letena and the late Gorsha. Will’s own career is one example of DC’s culinary diversification, with the chef drawing from nostalgia for his family’s Chinese home cooking to build on the Peruvian criolla hybrid menu at China Chilcano.

Perhaps inevitably, politics also creep in. Rob observes that DC’s social consciousness adds an unexpected layer of thoughtfulness to menu development, in sharp contrast to New York’s “shut up and cook” ethos: “if you’re doing something that’s maybe not politically correct, you’re going to get called out for it here and that’s a good thing because it makes for a better environment.”

But for all this talk about DC’s singularity, the omnipresence of technology offers a counterpoint. Johnny suggests that the style and format of DC restaurants are actually pretty similar to those in any other American city: “Especially now, the way information travels, you don’t need to be in a restaurant in Manhattan to do crazy tasting menus.” This flattening of technique also applies to the availability of ingredients. Johnny readily talks about how he procures top-quality seafood for Reverie by sending direct messages to suppliers on Instagram, a far cry from the old days of “calling one guy who knows another guy who knows these Mennonite farmers”;  Will, too, has used Instagram to track down sansho peppercorns, typically only found in East Asia, from a grower in Washington state.

Although the essence of Mid-Atlantic food might ultimately be impossible to pin down, it seems clear that the passion and diverse perspectives of the creators assembled here -- and of all the 2022 DC-Chesapeake Rising Stars -- are what really make the region stand out.

For more information on our partnership with StarChefs, CONTACT US here.

Events Beyond the Plate Good Libations Sweet Talk
❤0
back