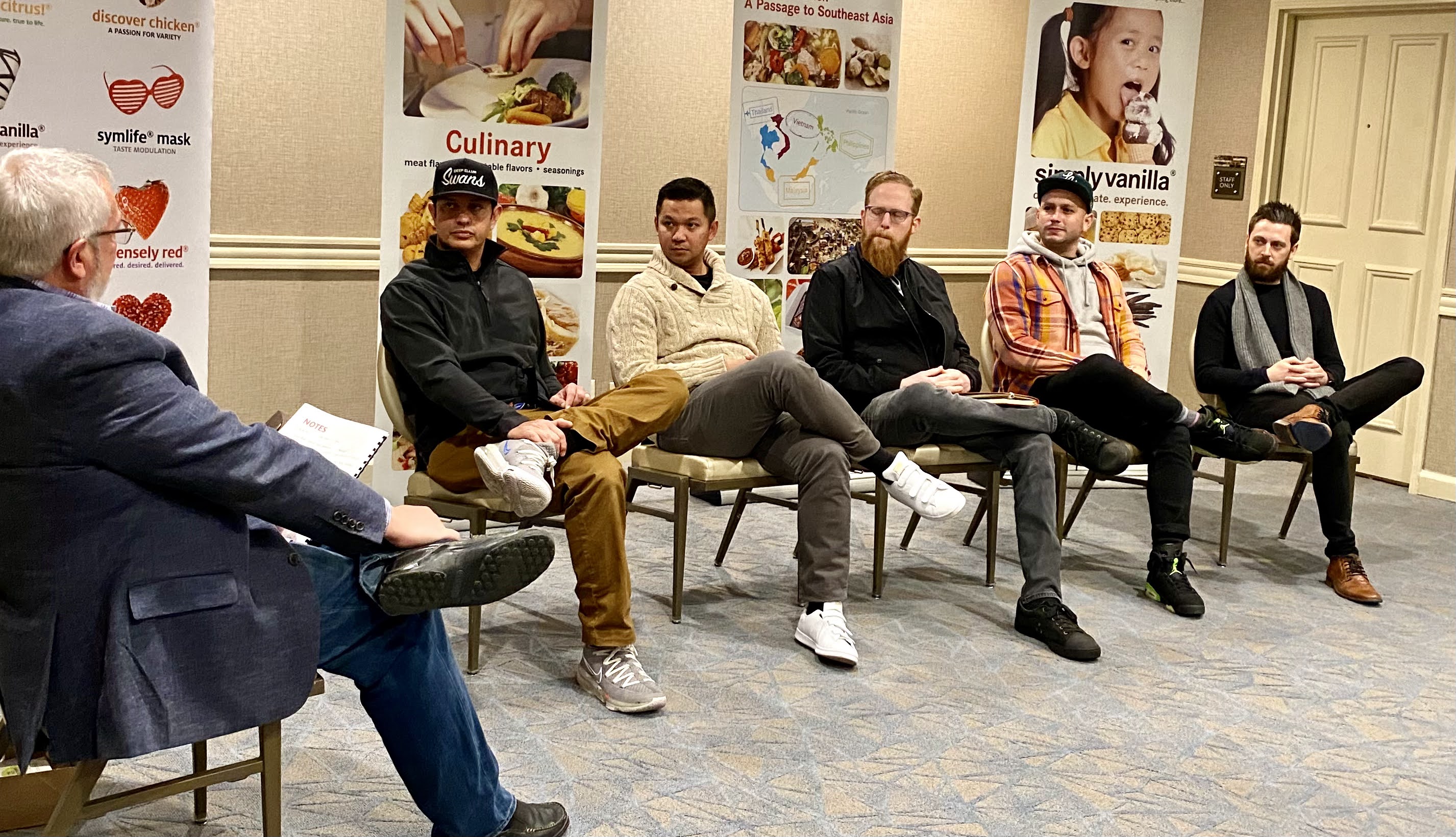 How Culture, Nostalgia and More are Shaping the Dallas Food Scene

This is a wrap-up of the Symrise-StarChefs Roundtable disucssion held in Dallas during StarChefs Rising Stars Dallas in December 2021.

The historic Adolphus Hotel in downtown Dallas played backdrop to this winter’s Dallas Rising Stars Roundtable Discussion, hosted by Symrise in collaboration with StarChefs. Emmanuel Laroche, Vice President of Marketing and Consumer Insight at Symrise, led the discussion, which gave participants a glimpse into what the Dallas food scene is like and what inspires the direction of food and beverage menus in the restaurant world. The panel not only offered insight into the culture of Dallas, but they also shared how these influences helped shape the city. One word that encapsulated the December afternoon was the comforting blanket of “nostalgia”. From conversations about what Dallas was a decade ago, to more anticipated creative conceptualization of rotating menus describing what has inspired the awardees – each of the talented food and beverage professionals were guided by reflections of yesteryear.

The day began simply enough with everyone introducing themselves and providing an overview into their background and current roles. An industry that was once dominated by expensive cuts of Texas cattle has grown into what appears to be now a somewhat progressive food city that has been largely influenced by diverse groups of newcomers moving to and adding to the already robust and distinctive culture of Dallas.

Gabe Sanchez is an award-winning bartender who was selected to spearhead a Dallas fav- The Midnight Rambler, a discreet cocktail lounge tucked away inside The Joule Hotel. Sanchez has curated an inventive cocktail menu and shared what inspires his thoughtful twists on classics.

Chef Charles Olalia is the corporate director of culinary for Makeready, a Dallas-headquartered hospitality and retail operator and management company which oversees The Adolphus. There, newly appointed Olalia has been charged with crafting thoughtful yet practical food and beverage experiences across the multifaceted brands, which locally includes Otto’s Coffee Shop, The French Room, and Rodeo Bar, all located inside of the hotel.

Related: How the Pandemic as Affected 2021 Chicago Rising Star Chefs

Matt Ford, executive chef of Billy Can Can, a swanky restaurant and bar, located in the heart of Victory Park, Dallas, dishing out excellent contemporary Texas cuisine. This Kansas City native previously executed fine dining at the distinguished W for Craft for six years. He also helped revitalize The Joule for another six years before joining Billy Can Can.

Iluggy Recinos, beverage director of Exxir Capital and was born and raised in sunny Los Angeles before relocating to the Big D. His philosophy on beverages, he admitted has been inspired by chefs and during the course of the conversation we see how current projects with both Paradiso and Casablanca showcase his full range of skills.

Executive Chef Christian Dortch, who was part of the opening team at Georgie. Coincidentally, a restaurant by celebrity chef Curtis Stone, that is rooted in tradition and promises an “experience that is unparalleled” and driven by intentionality.

The panel was moderated by Laroche and began with each of the panelists providing their own descriptions of Dallas’ food and beverage scene. It became abundantly clear early on that most of the panelists were not from the Big D, with an overwhelming amount of them having arrived five years ago and one just having relocated earlier this year during the pandemic. Another commonality that soon appeared was the impression that many had in the beginning of this foodie’s paradise. “Dallas was very steakhouse driven and all the things you would have imagined looking from the outside in.” Sanchez continued with a very interesting theory for the shift, “The whole Food Network and Travel Network shows and that almost voyeuristic approach to going around the world and trying things. People started trying more new things. Dallas is a very affluent city. What began happening is people started having these experiences you’d find on those television shows and then they’d come back. While other people were watching these shows at home and wanted to experience something similar (dining out).”  Executive Chef Matt Ford, also relocated to Dallas in 2006, same as Sanchez, and offered his thoughts on the culture of foods and beverages. “Unless most large cities, Dallas didn’t embrace celebrity chefs. It was all about uplifting and showing support to local chefs. Sometimes I felt the food was better, and there was better talent but it wasn’t received as well as local restaurants. People with money aren’t spending money on food in Dallas, they’re spending money on the scene.”  Olalia had a slightly different, yet optimistic opinion. “I have the freshest point of view here because I just moved in March (2021). One thing that is constant and amazing is its genuine – the hospitality here. Coming from L.A. it was hard to find that same nurturing quality. Here you may lack the cutting-edge techniques, but the warmth of serving? I’d take that over anything else in the world.” He exclaimed. He also stressed the importance of implementing change of periods of time. Adding, “You can change the creative development process but its not overnight. This spring I might get more progressive.” Sanchez, who was also founder of Black Swan Saloon in popular Deep Ellum for years before its closing, agreed with this sentiment but noted that trust necessary before you could implement changes.

Recinos also promotes change in small steps citing his biggest challenge as being able to keep volumes consistent while maintaining quality. “Everyone wants fast and people like a show.” He continued by expressing his appreciation for countries like Mexico, Oaxaca specifically, that vendors in LA would often source from to provide “the most beautiful produce! At Bestia (Los Angeles restaurant that Recinos previously ran) we had things like chocolate persimmons or malibu oranges!”

From there the panel then took a sudden welcome detour to exploring the various flavors in ingredients that were an inspiration to them whether they were crafting cocktails or designing elaborate foods for hungry patrons. Gabe Sanchez is inspired by people. It’s the chefs who are candid in their opinions about flavors and what works well with his drinks. He relies on their honesty to help him craft his delicious elixirs. When asked whether layering plays a factor or showcasing a specific ingredient, Sanchez acknowledged both aided him while Recinos said that for him it’s always about the food and drawing on their memories of flavors.

If these industry leaders from the 2021 class of Rising Stars, can teach us anything it’s how powerful it is to be able to guide the consumer from experiencing evocative flavor combinations while elevating their palettes with suggestive new tastes.

Looking for more Regional Food and Beverage Updates? Subscribe to our newsletter HERE