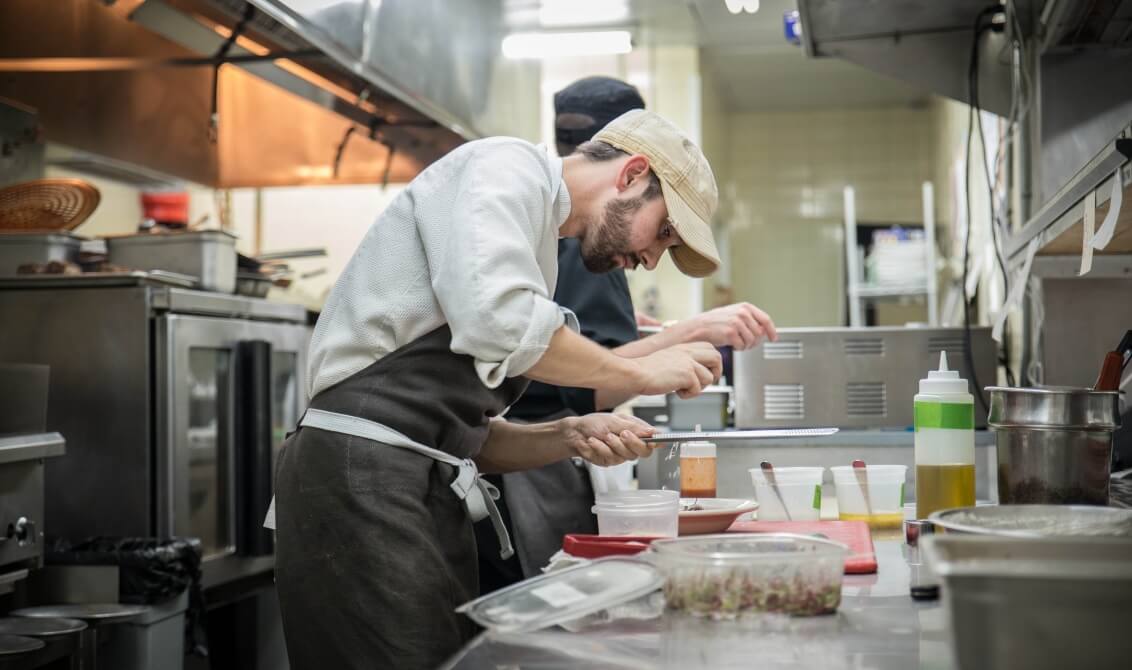 An Interview with Chef Clark Barlowe

If you’re looking for quintessential all-American Cuisine, look no further than the South! Considered by many to be the only true American cuisine, Southern dishes were born out of both necessity and history. According to Chef Clark Barlowe of Heirloom Restaurant in Charlotte, North Carolina; “Southern cuisine has always been a poor people’s cuisine and for most people that translates into heavy fried chicken or fried catfish or chitlins, beans and corn bread.” However, this is not really the case anymore. “When you are talking about authentic Southern cuisine, you are really talking about vegetable-driven, seasonal cuisine.” Of course, there are regional influences from different ethnic settlers, but the basis is iconically American. Having such a firm basis in history, it is easy to see why the Southern Revival has developed. As Chef Barlowe explains, “We can trace regional cuisines as stemming from other cultures, but we see this revival as going back to something original and comfortable. It’s the real American cuisine that originated here. The revival is about discovering what’s true.”

RELATED: Chef David Bancroft on the Flavors and Techniques of the South

As a predominantly vegetable-driven cuisine due to the agricultural roots of the South, much of the variety in flavors comes from the various nuts and herbs used. Many of these are indigenous to the Appalachia area, and are harvested in the wild. Chestnuts, black walnuts, and acorns all contribute unique notes of nutty, earthy, mushroom tastes. Garlic, chilies, dill, thyme, and oregano are used both in pickling and with other seasonings. Mountain mint grows wild in the highlands of North Carolina and provides a flavor combination of tarragon and mint. Kudzu is a very invasive weed which originated in Asia but was naturalized in the South to provide soil erosion control. The flowers are used to make a grape-flavored jelly. Sumac is a wildflower which contributes an acidic raspberry-like flavor. Interestingly, Chef Barlowe harvests it himself; “We use it in sauces; local breweries use it too. Sumac grows wild everywhere around here and over the past weekend, we harvested about thirty pounds.”

Besides the traditional fried chicken, country hams are a big part of Southern cuisine – some of them processed using acorns. Pork dishes are made with country ham, ham hocks, and all parts of the pig – including the head. One of the favorite dishes is Livermush – a country liver pate combining liver and pork shoulder. It is cooked, ground up, and then mixed with flour, corn meal, sage, black pepper, and spices and formed into a loaf which is then sliced and seared. This is a favorite at breakfast served with mustard.

The cuisine of North Carolina has varied ethnic roots. Dishes from the highlands are heavily influenced by Scottish and Irish settlers resulting in rich flavors; hearty stews with potatoes, braises made with red wine and beer. Coastal North Carolina combines flavors from Caribbean and Gullah cooking with plenty of fresh fish and shellfish, as well as earthier flavors from the Piedmont area of the foothills of Appalachia. Interestingly, tobacco also plays a role in Southern cuisine! The tobacco imparts vanilla, leather, and some cocoa flavors. The dried leaves can be used for smoking, and also work as an infusion into sugar for crème brûlée. According to Chef Barlowe, “It took me about two years to find an organic tobacco farmer here in North Carolina, where we could work with the leaves rather than just smoking with it. When you brûlée the sugar, you get this really interesting tobacco-like taste and an interesting mouthfeel.”

In-sight delivers the latest information and innovations in the world of savory including culinary and snacks.

The early North Carolina settlers used pine needles to make a tea that was very high in vitamin C, so modern chefs have found a way to incorporate pine into their recipes. According to Chef Barlowe, “pine found its way into cuisine with its citrusy and floral notes. You can make teas and brines and dry it and put it in sauces and sugars and salt – it is an incredibly versatile ingredient.” Since there is no citrus plant native to North Carolina, other sources of citrus flavors are used. The herb lemon balm provides a mild lemon flavor, as do certain types of honey. Chef Barlowe believes in making use of the wild ingredients all around him. “I could cite at least ten kinds of bees that produce honey – some with citrus notes. These are very different ‘wild’ ingredients. We are currently working on shrimp shell ingredients. We see it as a new product made from something that we previously discarded.”

Chef Barlowe sums up the melding of the old Southern cuisine with the current revival. “Southern cuisine has always been a poor people’s cuisine but what we have now is something different. A new generation of chefs have found that our cuisine is not now limited to these poor people selections. There are many more Southern foods; just as great tasting and with many more health benefits to them!”

Chef Clark Barlowe is very proud of his heritage as a seventh generation North Carolinian. His early background in his grandparents’ and parents’ gardens, and the restaurants of his father’s friends, has resulted in a cuisine rich in the recipes of his Appalachian roots. Chef Barlowe earned his Johnson and Wales degree on scholarship. He then worked at The French Laundry in Napa, El Bulli in Spain, and at Chez Pascal in Providence, RI, under Chef Matt Gennuoso before opening his own restaurant, Heirloom Restaurant, in Charlotte, North Carolina. Chef Barlowe relies on authentic North Carolinian farm produce for his restaurant and is often found in the forests and field sourcing ingredients in the wild for his menu.