Today we are launching a new monthly feature on in-sight. Each month, we will be bringing you the latest observations and trends from CEB Iconoculture Consumer Insights, one of our valued partners. The monthly post will feature observations from the food and beverage world as well as consumer outlooks and trends to watch from multiple industries, with the goal of bringing inspiration to our readers.

Today's post features four observations from CEB Iconoculture for the month of August 2014. Be sure to check back on in-sight every month for the latest feature in this series.

Out of the barrel: "Bourbon" attracts luxury-minded consumers to more than bevs

MillerCoors recently launched Miller Fortune, a high-ABV "bourbon-like" beer containing no actual bourbon that was developed to lure premium spirits drinkers. Though the drink raised some eyebrows amongst savvy consumers, it revealed that attaching terms like "bourbon-aged," "barrel-aged" or "bourbon-washed" attracts a more luxury-minded customer.

The invasion of bourbon aging has now extended well into the world of nonalcoholic beverages. For example, bourbon-barrel-conditioned coffee is making believers out of even the most skeptical snobs, and Rare Tea Cellar has an entire section devoted to barrel-aged tea blends. Bourbon-cask-aged chocolate and bourbon-smoked spices are also gaining traction. Vanilla, sugar, sea salt, paprika and peppercorns have all been transformed into must-have ingredients for home cooks looking to impress guests.

Specialty condiments are a natural arena in which bourbon can work its magic. Mustards, hot sauce and maple syrup all get the bourbon-barrel treatment from BLiS, a gourmet foods company that also makes barrel-aged fish sauce and a premium barrel-aged sherry vinegar ($80!).

Despite the relative proximity of their childhood years, Millennials remain a surprisingly nostalgic generation. Their tendency to look longingly backward shows no signs of slackening as new tools aid them in their quest for on-demand connection with the past. Timehop is a free app that takes users on a trip down social-media memory lane, every day (CNET.com, 27 June 2014). 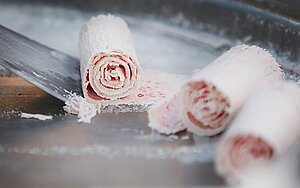 Timehoppers enjoy reminiscing about what they did on a particular day last year — or two years ago, three years ago, etc. — by viewing posts, pictures, videos and life events that are synced to their personal Facebook and Twitter accounts.

Timehop, along with social media rituals like Twitter’s Throwback Thursdays (#tbt), provides further evidence of the Millennial generation's seemingly endless fascination with the recent past — and themselves.

A toast to bread: Hipsters embrace the $4 slice

It happened with cheese, cider, chocolate, pickles, coffee — even vinegar has gone artisanal. So is it really so crazy to think that artisanal toast might be the next big thing? A number of coffee shops, breakfast spots and bakeries are making a strong case for gourmet toast, and foodies are responding by happily shelling out $4 for a slice (Pacific Standard, 13 January 2014).

At Red Door Coffee in San Francisco, customers line up for toasted bread slathered in salted butter that rings in at $3 a pop. Acre Coffee in Petaluma, CA, has elevated the humble crisped bread to the point that it's worthy of an entire "Toast Bar," with breads ranging from gluten-free to seven-grain.

People are getting their toast fix at home too, dressing up the ultimate comfort food with Maldon sea salt and almond butter.

Not everyone is on board. Tech writer Jolie O'Dell blames a culture of overspending. "Good toast and a plain cup of coffee shouldn’t cost $6," she writes (VentureBeat.com, 21 August 2013). "We fetishize the precious processes and benchmarks and prices that, in reality, have no bearing on how good something is."

We've covered the ways that US Latinos have taken American foods and adapted them to their tastes and preferences. But what happens if a Latino home cook — particularly one who is newly arrived in the country — wants to more faithfully recreate an American classic that she tastes at a restaurant or sees on her child’s lunch menu?

While some companies have seized the opportunity — Kraft’s “Sabemos que te va a encantar" (We know you’re going to love it) Macaroni & Cheese campaign, for example — many times these Latinos are left to wander the grocery aisles, or surf the internet, for clues.

Some of their best resources come by way of blogs and vlogs. Online they can find videos, in Spanish, made by home cooks who explain how to make french toast and pay de manzana (apple pie).

There's a great opportunity for those willing to take the time to break down recipes, introduce products and help Latinos embrace new flavors. However, as the Kraft example shows, the most successful messages will introduce the products while reassuring Latinos that making mac 'n' cheese at home doesn’t make them any less Latino.

Beyond the Plate Good Libations Sweet Talk
❤3
back