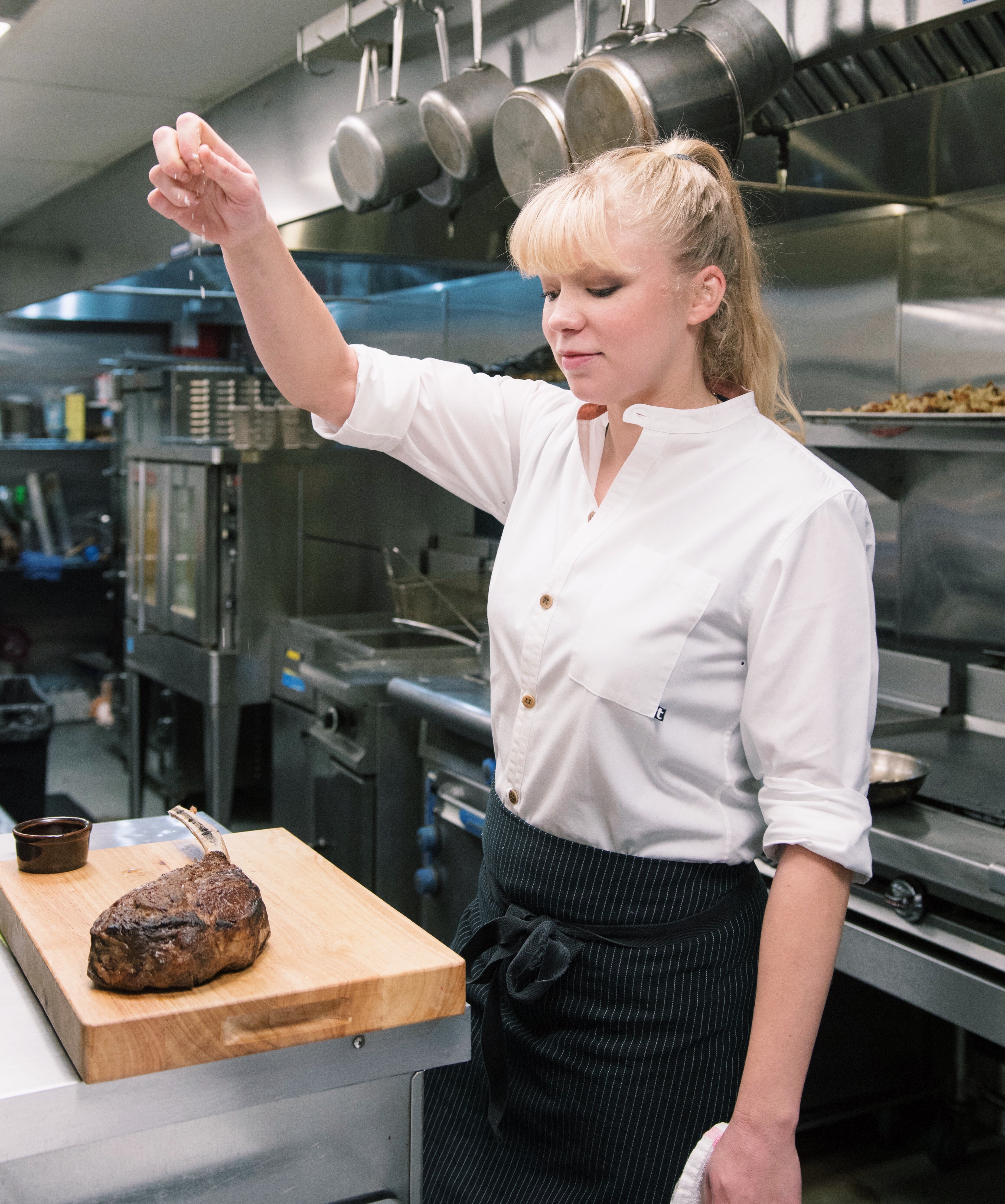 Growing up, Alison Trent was always thinking about food. It’s not that her parents didn’t feed her – they did. It’s just that food was a centerpiece of her family; grilling at home was an important part of the day. So was being outside.

The Ysabel and Laurel Hardware executive chef grew up in Canberra, Australia, and loved exploring the open spaces with her twin brother and two sisters, complete with venomous spiders, deadly snakes and the odd kangaroo in the backyard. The self-described tomboy, who often cooked alongside her sister, took a series of odd jobs starting at 18 when she moved to Sydney, a bit of a restless, headstrong move she’s since apologized to her parents about.

Food, however, remained her passion, and a long-held interest. “I was obsessed with it,” she said. “I’d always cooked with my sister, loved cooking for friends and family, experimenting with recipes, and of course eating out.”

Which is why – at the ripe young age of 21, she headed to Manhattan to attend culinary school at the French Culinary Institute (now the International Culinary Center). As much as she loved the learning, she missed the sunshine and so, post-graduation, headed to California to pursue a more outdoor-oriented lifestyle.

Her goal, she said, was to work for the best chef in town, and so, after a few white lies regarding her experience, she found a job on the fish station at Providence under Chef Michael Cimarusti. It was there she picked up her love for high-quality ingredients and beautifully executed dishes.

After reading “The French Laundry Cookbook” by Chef Thomas Keller, she became determined that working at the Yountville, CA restaurant would be her next step. Which is why, after landing a job at Bouchon in Beverly Hills, she started asking – she’d call it “begging” – to be transferred. Eventually, her wish was granted, and she headed north to begin life as a prep cook at The French Laundry. She’d be there three years, working her way through different positions before moving back to LA for a position as executive sous chef at Bouchon.

After two years there, she moved to Ysabel in West Hollywood where she relished the creative freedom to build a team, create a menu, and define her personal style. One year after that she took over Ysabel’s sister restaurant Laurel Hardware.

Throughout it all she’s stayed true to her core values of bringing nature in and being inspired from and respecting the land. In fact, Trent says if she weren’t a chef she’d possibly be a farmer or a gardener, or at least doing something with her hands. She paints and does ceramics on the side.

As for her cooking style, she describes it as “really flavorful,” a nod to the thoughtful ingredients she chooses. Trent enjoys cooking street food and prefers items that are delicate but with big flavors “It’s all about balance,” she said. “I like a lot of acidity and bright flavors.”

How she cooks is also how she eats. Trent says she gravitates towards cuisines with big flavor profiles, such as Korean BBQ, sushi and Indian. With so many restaurants opening in LA right now, she said she could eat at a new place every night. However, after a long day of cooking, she tends to go home and eat healthy and simple, using as much from her garden as possible. Grilling, needless to say, is also high on her list.

Her inspiration for all she does comes from the ingredients -- no surprise when you consider her background and career path. “There’s nothing like the first peach of the season,” she said. “I don’t like overcomplicating things.”

This time of year [it’s summer when we conduct this interview], she’s all about produce – the stone fruits. vegetables and herbs at the farmers market.

“There’s something about the sweetest strawberries or the most amazing tomatoes,” she said. “Obviously you go through cycles and find a love for each season, but for me it’s all about fresh ingredients and letting those flavors speak to me.” Having a relationship with the farmer that produces those items is also key.

Doing the right thing in terms of sustainability and what’s truly local requires a lot of dedication but it’s something Trent takes very seriously.

She said she was fortunate to be employed by some great chefs early on in her career that drilled this concept into her. For her, it just makes sense. “It’s wonderful that as a restaurant we can support these farmers and companies and watch them grow and get bigger,” she said. “It’s also beyond gratifying to put something on the menu that is not only the right thing to do but is also delicious.”

The sustainability trend is something she’s starting to see more and more restaurants tackle as more diners want to know where their food comes from. “It’s really crazy when you start looking around at composting and recycling and see that many high- volume restaurants are not doing that,’ she said. “It’s something, as an industry, that we can – and should – change.”

Trent is so committed about changing her own restaurant’s sustainability practices that she recently traveled to Costa Rica to work at sustainable restaurant where she was shocked to see so many recycling and waste areas – more than 15! -- and the wonderful symbiotic relationship the eatery had with a local farm. Excess food and trim, for example, went to feed the farm’s pigs and then the pigs went back to the restaurant. “We, as an industry, need to be better at finding links to do that,” she said. It’s an initiative she hopes to launch soon at both of her restaurants.

Being involved in the community and constantly learning is, in fact, one of her favorite things about being a chef. “The more you can seek out and the more you know only helps you grow,” she said.
While she credits Cimarusti and Keller for mentoring her, she also pays homage to the many cooks along the line at the places she’s worked. “You don’t just learn from the executive chef,” she said. “You also learn from the many people you’re working so closely with.”

Collaboration, she stressed, is hugely important.

Even after all these years, she still loves asking questions and exercising her brain by being creative. “I’ve never stopped obsessing about food and I’m always striving to learn more,” she said. “By staying motivated, you stay current in this industry.”

Discover Your Own Industry Motivation With The Insight Newsletter!