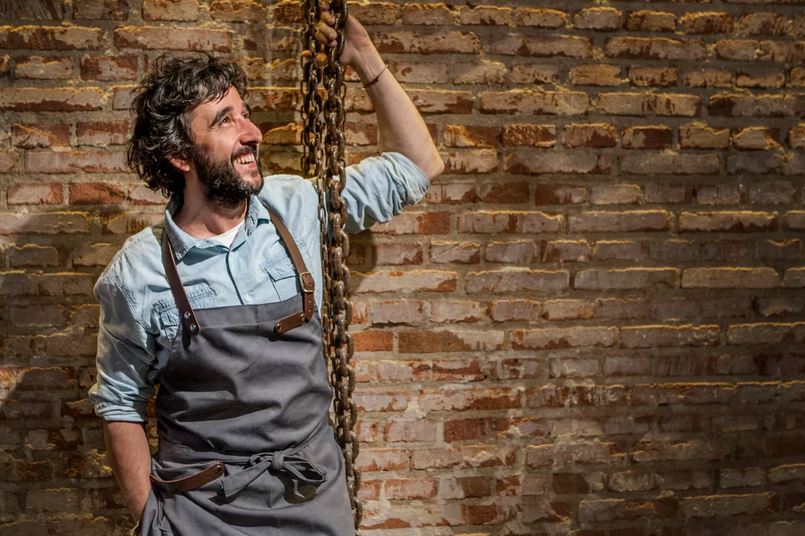 When we hear the term “fine dining,” the first thing that comes to mind are fancy tasting menu-style meals, small delicate dishes with beautiful plating, rare ingredients that cost thousands of dollars to acquire, and chefs in the kitchen hard at work, applying secret, complicated techniques — away from the view of the guests, like a great magician who never reveals their secrets. But Chef Diego Guerrero’s restaurant DSTAgE (Days to Smell Taste Amaze Grow Enjoy) takes a new approach to the fine dining culinary landscape. He wants people to know about his food, and perhaps learn something new about food that they otherwise would not have known. With his demo at the 2019 StarChefs International Chefs Congress, Guerrero definitely schooled us all.

During his main stage demo entitled “Breaking the Rules of Fine Dining,” Guerrero openly discussed what he was doing in his kitchen at DSTAgE. The demo stayed true to the Madrid-based restaurant, which has its kitchen situated at the center of the dining room. He previously told Eater that he wanted customers to get the full dining experience, an immersion into the food, and so he wanted the kitchen to “become the center and the soul of the restaurant.”

At the ICC, he demonstrated the same transparency, with a presentation that revealed what tricks he had up his sleeve, especially because he really wanted to share with everyone what he had discovered regarding sustainability, and the next-level steps he’s been taking to contribute to the environmental cause. The chef was vocal about his concern for the planet, and dedication to the Sustainable Development Goals first presented by the UN in 2015. With that in mind, he’s done everything he could to maximize the resources he has in the restaurant.

Don't miss the latest flavor trends in the world of food and beverage, subscribe to In-sight!

First, Guerrero presented his restaurant’s version of calamari, which instead of using flour and eggs relies on the phospholipids already present in the squid to form the crispy outer layer. He added that this also made his food more inclusive as it considered allergies, gluten sensitivities, and dairy sensitivities.

Another astounding creation he wanted to present to other chefs and conference attendees was how he would use a whole prawn, “just using one product,” he said, for a tartare-type dish. The natural butter of the seafood gave the meat a rich taste, and the legs, which people typically discard, were deep-fried and used as a garnish.

Probably the most awe-striking of all his demos was the reconstruction of an anchovy. The chef showed what the DSTAgE does with the head and bones of anchovies leftover from cooking other menu items. Again, what would otherwise be thrown in the compost or trash Guerrero turns into a work of gourmet genius.

He leaves the bone and head structure of the anchovy intact, and recreates the meat that surrounds the bones using tapioca pearls boiled in an iberico ham stock, and uses seaweed to mimic the scales. The audience, truly impressed, applauded this culinary creativity.

“We, as chefs, try to discover new flavors, new tastes,” said Guerrero. But now he is also becoming “more conscious because of society’s demands.” He ended with a message to everyone listening saying that “With small steps, we can all make a big effort.”

RELATED: What Are Top Chefs, Mixologists and Pastry Chefs Talking About?