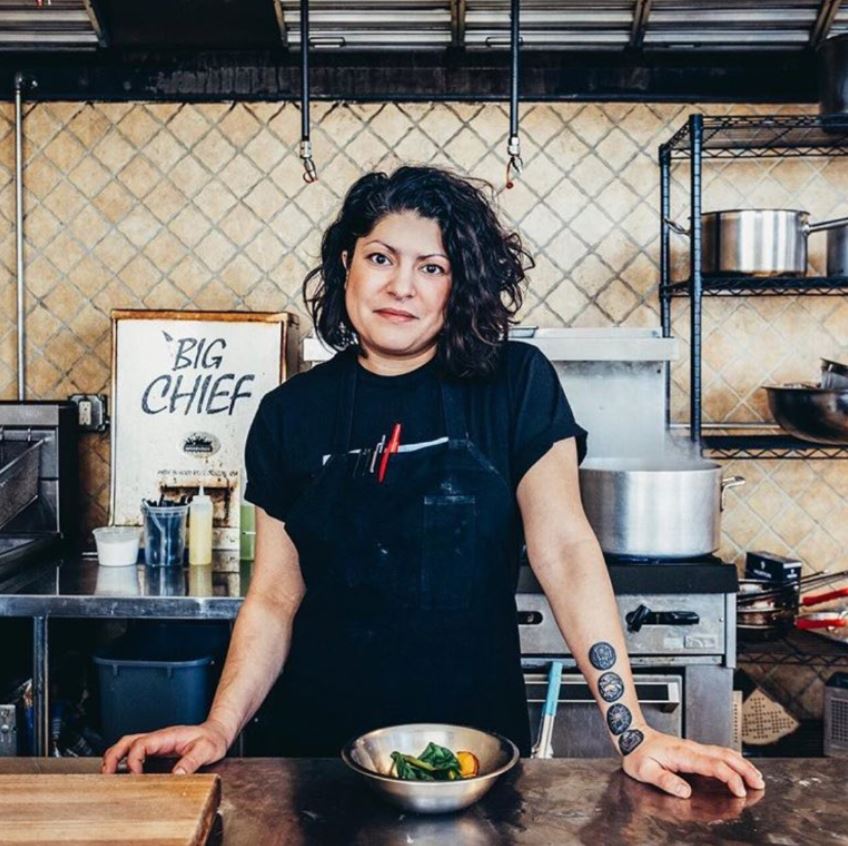 Google Misti Norris and you’ll find a lot has been written about her, especially in the past year and a half. Ever since the North Carolina native (raised in Houston) opened her small, thoughtful restaurant focused on the use of farms, foraging, fermentation and fire in a former 1930s gas station in an unlikely part of Dallas, the accolades have been pouring in. (The restaurant opened in March 2018.)

In March 2019, Food & Wine Magazine headlined a story about her with the words: “The Very Big Thing Misti Norris Just Did.” The condensed version: “Petra & The Beast isn’t just an exciting new restaurant in Dallas; it’s about how the 32-year-old chef-owner made it happen, and what that could mean for young chefs everywhere.”

D Magazine, in July 2018, devoted its praise solely to Norris’ famed – and every changing -- charcuterie board, which, on a given day can include anything from a pseudo-boudin terrine to whipped lardo and smoked beef tongue. Writer Catherine Downes called Norris “part scientist, part visionary” who’s “pushing boundaries with her earthy and innovative dishes.” 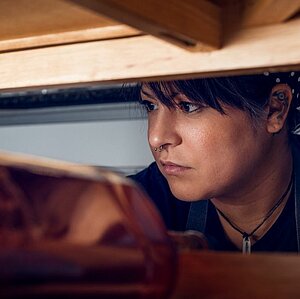 Reading about this down-to-earth neighborhood restaurant – and the gusty chef behind it -- you can’t help but have the urge to book a ticket and hop on a plane to taste dishes such as chicken hearts, pig tails, pork tongue ragu and blood pudding. With an ever-changing menu based on what’s available at area farms, you never know what you’re getting.

Though Norris has been working hard for 18 years – her first cooking job was at 15 in a retirement home and since then she’s has stints at Nana, Bijoux, and FT33 in Dallas – it’s Petra and the Beast that has capitulated her onto the culinary map.

Under her direction the restaurant was named one of Esquire’s Best Restaurants in America 2018, one of D Magazine’s Best New Restaurants in Dallas 2018, and the Dallas Observer’s Best Charcuterie Program 2018. Most recently she was named one of the best new chefs in 2019 by Food & Wine; she was also named a semifinalist for James Beard in the category of Best New Restaurants. That’s in addition to earlier accolades: In 2016 she was named a James Beard Award Rising Star Semifinalist.

We caught up with her on a night the restaurant was closed and she was canning pickles.

Symrise: Describe your culinary POV in a few sentences.
Misti Norris: Pushing comfort levels and gaining people’s trust. I think that’s the best way to describe what we’re trying to do here – we’re putting things in front of people that aren’t common.
We also try to be as sustainable as possible in just about everything we do.

Symrise: Tell me some of the items I might find on your menu.
MN: It’s always changing but usually pig tails are on the menu. And pig’s heads. We also do multiple tongues and feet. And we love chicken hearts. The hearts have definitely gone from something that was outside some people’s comfort zone to ‘Wow, that’s so delicious do you have it on the menu?’ We have a lot of regulars that for them, it’s not something strange or different anymore. We also tend to have sweetbreads, which are definitely more mainstream.

Symrise: Do you have a favorite dish?
MN: I’d say the chicken hearts. They have such great flavor. We work with a really great farm that’s about 40 miles north of us called Cartermere Farms and they produce some of the best poultry. We’ll usually marinade the hearts in sake leaves, then put in a preserved hot sauce and serve with preserved pickles. Our charcuterie menu is another top seller and constantly rotating. We have no large corporate accounts at Petra and the Beast; everything we get, we get from local farms. We very much rely on our relationships. 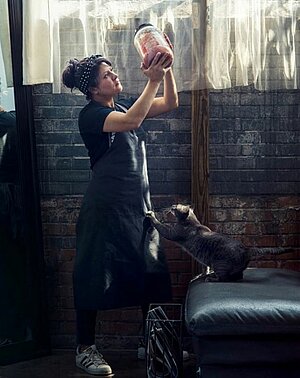 Symrise: What made you fall in love with food?
MN: I think it just happened naturally. I’m going on almost l8 years of cooking. I think through working with different chefs and seeing different techniques and then working more locally and getting into foraging and finding all this great stuff that grows in Texas – I didn’t learn how to forage outside of Texas – and have found all these things that stretched my curiosity. It’s just grown into a natural progression. From foraging, I then started thinking preserving, which led to fermentation, with led to thinking and breaking down the whole animal and using every part.

For us it’s extremely important to be as sustainable as possible. And that challenges us to figure out what to do each day. For example, one farm I work with grows carrots and produce so we ordered 40 pounds of carrots. Which in turn means 40 pounds of carrots with tops. We fermented some; made powder and salts with the tops and also fermented greens. It challenges us as cooks to do something different instead of just going the same old route.

Symrise: It’s been said eating at your place is an adventure: What does that mean?
MN: For me it’s a normal way of cooking. And that’s what I’m setting out to do -- to make all these things approachable so they are naturally more acceptable to people. I’d like to change people’s mindsets on what’s good.

Symrise: Do you have any favorite ingredients or flavor profiles?
MN: For us, because we rely on what’s in season, it’s constantly changing. What we get one day we might not get another. Personally, I like bitter, sour and salty.

Symrise: Let's say it's a regular Tuesday night and you're at home. What's for dinner?
MN: I have to say there’s not much in my fridge. I’m rarely home and when I am, I live on white rice and veggies. In my personal life, I don’t eat a lot of meat. I do things that are quick like crappy brie and crackers or hummus. I eat a lot of hummus.

Symrise: Name a chef mentor.
MN: Anthony Bombaci – I worked for him for four years at Nana – and he was hands down the greatest influence in my career. He completely changed the way that I looked at food and made me realize it’s so much more that what you see when you first look at it.

Symrise: Has the success of Petra surprised you?
MN: Oh my god, yes. I did not at all expect the accolades that we received or the attention. Petra and the Beast was always meant to be a neighborhood spot with price points that are low and everything made in house. The whole point was to create a space that’s causal and approachable for everyone and within everyone’s reach to get good food.

Symrise: Would you open another Petra?
MN: No. Petra can never be replicated. It was a concept built through evolution and the building we’re in and the neighborhood and really listening to our guests but also keeping true to what we believe and what we want to do.

Symrise: What’s something very people know about you?
MN: I guess that I collect comic books, graphic novels and vinyl toys. I also was a competitive gymnast for 10 years and competed internationally. I quit when I was a sophomore in high school. I almost tore my Achille’s heel and just felt done.

I will say, though, that that experience helped me handle opening my own business. It gave me structure and foresight to realize that even when things are stressful, everything will be ok.

CLICK HERE to stay tuned for more in our Chef interview series!