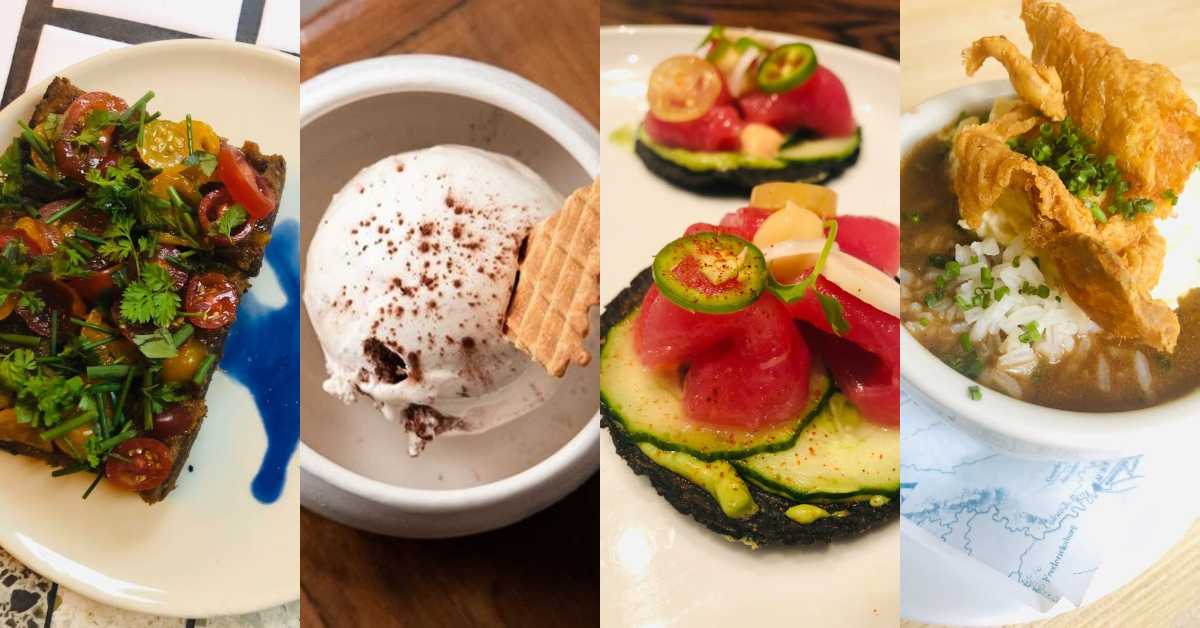 This article is a recap of the 2019 StarChefs' Houston Rising Stars event that took place in December.

Houston’s Rising Star Chefs participated in a Symrise roundtable discussion on their creative process, their challenges and inspirations, and how flavor and ingredients remain at the heart of their craft. Chefs Bobby Matos and Kaitlin Streets sat alongside Pastry Chef Meredith Larke, Mixologist Tommy Ho, and gelatician Jasmin Chida as they gave insight into their culinary arts. It was immediately apparent these chefs saw the value of seasonal ingredients as the starting point for innovation in the kitchen.

Seasonality brings a measure of uncertainty that the chefs embrace. “Citrus is something that we cherish in Texas,” said Matos. Texas ranks 3rd in US production of citrus, with grapefruit, oranges, lemons, limes, and kumquats the most popular citrus grown. Grapefruit is by far the largest crop produced, making up 70% of the 32,000 acres in the Lower Rio Grande Valley, while the other 30% consists of oranges. However, both harvests occur in the fall, which can put these tropical plants at risk of dying in an unexpected freeze.

From year to year, “a crop may be exploding, or it could be a bust, it’s hard to gauge,” said Larke. This unpredictability of crop growth for a given year profoundly affects the creative process that the chefs employ and, therefore, the menu items available in Houston.

The panelists agreed that elongating the use of a particular product as much as possible is one valuable tool used to combat this issue. When an oversupply is available, utilizing methods such as pickling, making jams, developing a syrup, and many other creative avenues that allows chefs access to those ingredients throughout the year, while limiting waste.

Not only do these professionals look at seasonality of individual products, but also the traditional seasonal cues. “People want pumpkin spice during the fall,” said Ho, “but they won’t want it if it’s warm outside.” The Houston climate oftentimes throws a wrench into traditional food and season pairings. “We’re trying to serve seasonal dishes when its 85° outside. Sometimes it feels forced,” said Matos. For an ice cream shop, this is an even greater challenge. “You have to be innovative, make it work,” says Chida. “People want warm during the winter, so we’re doing cobbler as well [this season].

With “in season” crops as the foundation for creating dishes, drinks and desserts, the chefs agree that technique, and “making it exciting and different,” as Matos put it, becomes the goal. However, putting the chef’s own creative spin must be balanced with keeping the product relatable enough for customers to feel comfortable ordering it. “A lot of chefs go for the cool factor, but we have to determine if it will sell,” said Matos.

Although patrons may already be comfortable with particular dishes, the panelists agreed that customers and chefs themselves are oftentimes surprised by unexpectedly delicious flavor combinations. “Innovation means using ingredients in a different way; doing something that people don’t expect. Doing the classics in a different light,” said Ho. Streets agreed. “You can’t be afraid to do something that nobody else is doing. It’s exciting to do something new and be intimidated by a project. Limitations and challenges are exciting,” said Streets.

Chida gave an example of how she does the unexpected with her ice cream flavors. “I like savory ingredients with ice cream, and incorporating South Asian cuisine, with ingredients like cardamom and, pomegranate rose,” she said. With the popularity of vanilla ice cream, Chida took it a different direction by creating “vanilla bean tres leches” instead. “I wanted to build upon the staple flavors, and keep it fun and interesting,” she said, “and it’s been our best seller.”

Ho described inventing a sun-dried tomato infused rum cocktail that strikes the perfect balance of sweetness and acidity, with sugar added for texture. Larke explained that when creating desserts, “I’ll season any sweet dish with salt like a savory dish because it brings out the flavor.”

When imagining potential flavor blends, Matos said, “I can always taste the flavor as I think about it. All good chefs can put together flavors in our heads.” Playing with various flavor combinations gives these chefs a good sense of what is possible. “It’s good to make things that you think will taste bad just to see what the flavor turns out to be,” said Ho. “As a chef, you need to build flavor profiles in your mind, like an encyclopedia of food,” said Larke.