Monthly Mixology with Junior Merino: The Legend of Agave and Tequila

By Junior Merino, The Liquid Chef

Like all great stories, the legend of the agave plant and tequila begins with love. And like all great legends, this one begins the same...

Once upon a time, a long time ago the Aztec god of learning and knowledge, Quetzalcoatl, came upon the beautiful sleeping form of Mayahuel and immediately fell in love with her. He would come to her window nightly to stare at her for hours while she dreamed. Mayahuel was a young and beautiful girl, kept prisoner by her spiteful grandmother, Tzintzimitl who was jealous of Mayahuel’s youth and beauty.

CLICK HERE to view the best Monthly Mixology posts from 2014

Quetzalcoatl told Mayahuel he would help her escape in exchange for her agreeing to come away with him forever. Once freed from her imprisonment, Mayahuel’s heart filled with love for Quetzalcoatl. However, still afraid of being found by Mayahuel’s vengeful grandmother, he transformed both he and Mayahuel into a pair of trees so they could be in one another’s arms without fear of discovery. 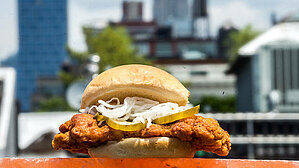 Now, here is where the fairytale becomes a tragedy. The old woman was not fooled. As she came with her heart intent of murder, Quetzalcoatl fled. However, Mayahuel didn’t escape. Her grandmother called stars from the sky and set them to devour Mayahuel. As a savage storm starts to fill the sky, Quetzalcoatl returns to his beloved’s remains and with a heavy heart and eyes filled with tears, he buries what remains of Mayahuel.

At that moment, an agave plant began to grow from the buried remains of Mayahuel. As the last spiky leaf grew, the savage storm hit the plant with lightning, and the spiny leaves were consumed by fire. The core of the plant, now exposed, began to seep the blood of Mayahuel, a honey-like nectar, sweet and aromatic.

The moment the storm passed, men who had been hiding in a cave waiting for the storm to stop, stepped out and were enticed by the aroma of the nectar. Following the smell, they happened upon the roasted heart of the plant and found that with the nectar, a white liquid also seeped from the plant. Separating the liquids, they made a beverage which would later become known as pulque, they made a drink worthy of the gods which only royalty and priests would drink.

Now as legend becomes reality, we fast forward to the arrival of the Spaniards to the new world, who were revered as gods, were given the sacred drink. Impressed with the flavor, they decided to distill the agave liquid, resulting in the groundwork for what would become a spirit called “vino mezcal”, which would eventually become know as “tequila”.