Rise of Ramen: A Q&A on One of the Hottest Trends in the U.S.

Recently, the culinary team at Symrise held their first ever “Ramen Invitational” at the Symrise North American headquarters in Teterboro, NJ. The event served as both an educational event for the Symrise team as well as a fun tasting event featuring two different types of ramen prepared by the culinary team.

Dylan Thompson: What do you think is driving the recent ramen trend in the United States?

Noah Michaels: I think 2 things are driving the current ramen trend.  First, it’s being driven by younger people (millennials and younger gen X ‘ers) who are living in cities and are still in more entry level careers.  They have a little more money than they did in college but are still looking to purchase the maximum amount of food for their money.  They wind up eating more upscale versions of the foods they ate in college like pizza and ramen.  The other factor driving the trend are the new wave of innovative Asian chefs who use Ramen as a platform to showcase their specific culinary voices.

John Selser: I believe the recent ramen trend is being driven by this new era of high-end authentic Japanese ramen that Americans have not seen before.  Who doesn't love a bowl of pork fat and hand made noodles?

DT: Do you see the trend moving into packaged foods? If so, how would it translate (frozen aisle, meal kits, etc.)?

NM: Unlike the five for a dollar packaged ramen Americans are used to, Japan produces packaged Ramen at various price points.  These higher end ramen packages often contain multiple pouches including premium noodles, a liquid sauce pouch, a dried vegetable pouch and a flavored oil pouch.  Sun Noodle, the company that produces the fresh ramen noodles for most of the best ramen restaurants in the country, just released a premium refrigerated ramen kit including fresh noodles and a liquid soup concentrate.  I think this type of kit is just the tip of the iceberg.  I suspect grab and go type frozen Ramen kits would appeal to busy millennials.

JS: I do see this trend being incorporated into packaged goods, especially into frozen ramen noodle kits, and to the dry "Top-Ramen" type of noodles.

DT: What are the main ingredients in a traditional ramen dish? And what are some interesting twists to tradition that you've seen?

NM: The typical components of ramen are noodles, broth, garnishes/toppings and Tare, a concentrated flavor sauce which differentiates the different styles of ramen.   A typical ramen restaurant will make a mother broth or Dashi and then make multiple Tares which are mixed into the broth when the Ramen is served.  Some of the interesting ramens being served now are the Momofuku style bacon Ramen, Kim Chi Ramens, and Mazamen, a brothless Ramen which is treated like pasta and tossed with rich flavorful sauces.

JS: Ramen is traditionally wheat noodles in a meat based broth served with different condiments and meats depending on where in Japan you are.  The broth is the real centerpiece of the soup and is often flavored with miso, soy sauce, and hot chili paste.  Every region of Japan has a different variation of ramen.  It is like how in the US we have different styles of BBQ, Japan has different styles of ramen depending on the location.

DT: Can you name some interesting ramen restaurants in the U.S.?

JS: One of the most popular restaurants in NYC is Ippudo Ramen.  Ippudo has several locations around the world.  The restaurant has a great up-beat vibe and offers many different kinds of ramen.

DT: What sort of flavors/seasonings are a key part of ramen dishes, or may be in the future?

JS: The broth holds the rich deep flavor of pork or chicken and sometimes seafood.  The deep fatty pork flavor is key to having a good bowl of ramen.  Togarashi is a very popular seasoning that is served with ramen and is a spicy red pepper seasoning.  Future ramen bowls may have flavored noodles, more seafood/curry broths coming into play.

DT: Any other thoughts on ramen that may be valuable to Symrise customers?

NM: I think the great thing about Ramen is that it plays in that space of familiar but exotic.  We all ate Ramen in college so it’s a comfort food at some level.  At the same time it’s a platform to bring in very traditional Asian flavors.

JS: I believe that the new era of ramen in the US will become more and more popular as more ramen shops open up.  The deep rich broth of ramen is very unique and offers a flavor explosion in every bite.

Keep an eye out for more upcoming ramen articles on Symrise as the trend continues to grow in the United States. 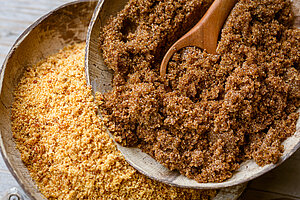