José Andrés, one of the culinary visionaries StarChef Founder Antoinette Bruno credits with being on the forefront of Spain’s contributions to modern cuisine, opened his presentation at the International Chef Congress (ICC) speaking about his philosophies – “Eating is about the unexpected,” he said -- and about his humble roots cooking with his mother.

His presentation, titled “From Minibar to Beefsteak,” covered the gamut, from how he started his Minibar restaurant with just six seats and an initial investment of $25,000 (he now has 17 restaurants from Puerto Rico to Los Angeles), to how he likes to start a meal with a variety of snacks to tempt and excite the palate. “That’s how we do it in Spain,” he said.

He also talked about changing the structure of a dish, always looking at it in a new way, like a kid who goes to the market for the first time and is drawn in by the allure of a plump, red tomato. 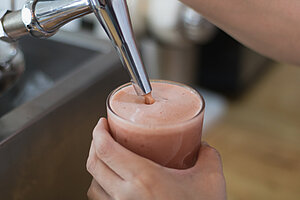 “I think about ingredients talking to me and saying, ‘I am tired of you always looking at me the same way – help me out,” he said. “You need to cook food like you never saw it before. At Minibar, we don’t take anything for granted. We push ourselves and go places we’re not supposed to go.”

That includes taking the influences of other cultures -- Peru, Japan, and Mexico were a few he mentioned -- incorporating what you think you know and recreating it. He is big on simple ingredients – an egg, a vegetable -- and turning them into something elegant. Case in point: Huevo con migas: eggs poached at exactly 63° C, which gives the egg an ideal consistency, with a yolk that’s always perfectly runny. “Two ingredients can make a dish,” he said.

He also talked about a few Minibar classics: Blue-cheese almond nitro cup (he’s a fan of liquid nitrogen), a Philly cheesesteak he transformed into something whimsical and elegant, corkscrew “pasta” injected with pesto (the fusilli is made with water and a gelling agent, and each noodle filled using a syringe), and an edible Bloody Mary made with vodka-flavored celery, Tabasco, fresh wasabi, tomato and celery leaf.

CLICK HERE to see the Top Dishes from Starchefs ICC 2015

As much as Andrés discussed ingredients and techniques – he ran a short film highlighting the intense rethinking of common textures and flavors that go into each Minibar dish -- he’s also a firm believer in people, reminding the audience that chefs are only as good as the staff they are surrounded by.

That people philosophy extends to the front of the house, specifically, the guest experience. He said he is always watching to see how diners respond to that very first bite. “You need to look at the faces of the people eating your food and see how they react,” he said. “These are the people who will be spreading the word about you so you need to pay close attention.”

Symrise caught up with him after his presentation to get answers to a few more burning questions:

Symrise: What are your "go to" ingredients?

S: Are there any new flavors you are playing with now?

A: We just opened a new restaurant in the Mexico City W Hotel called J by José Andrés, where we explore the connection between Spanish and Mexican cuisines. It’s been fascinating to work with these two cultures’ ingredients.

S: You mentioned vegetables being the next thing on your plate. Why the fixation?

A: Because vegetables are just as sexy as meat! At Beefsteak, we combine flash-prepared veggies, grains, freshly-made sauces, crisp and fresh toppings and the option of a meatier topping for an unbelievable meal in a bowl. We also have incredible soups and sandwiches like the BEETsteak burger, which I like to refer to as #theotherredmeat

S: Where do you get your inspiration?

A: Inspiration comes from everywhere. I am always inspired by art, nature, or music. I recently created a dish with the LA Philharmonic that was inspired by the Leonard Bernstein suite “On the Waterfront.” If you are open to it, you can really see that inspiration is all around you.

S: Any other trends you’re seeing in the kitchen?

A: I think the greatest trend right now is plant-based protein and dairy products, like what companies Hampton Creek or Beyond Meat are developing. They’re revolutionizing the way we feed ourselves and grow our food, and it’s for the better.

Good Libations Beyond the Plate
❤4
back