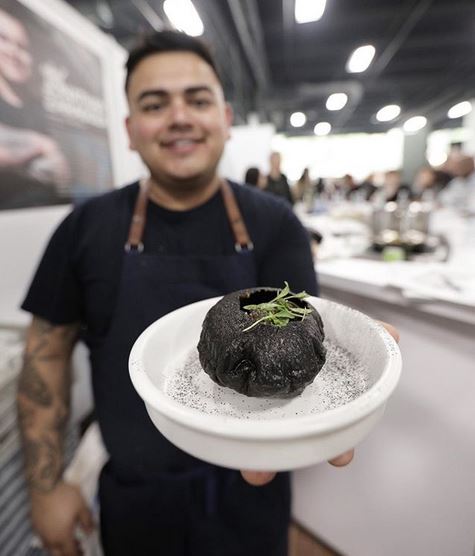 “Next-generation immigrant cuisine is the reason to dine out in America today,” said Starchefs’ Eddie Gonzalez in the Trends Report video at StarChefs International Chefs Congress (ICC) opening address. “Immigrants and the children of immigrants are raising fine-dining training to marshal and hold the power of authenticity in their cooking. .... That sense of ownership is powerful.”

So how does a next-generation Mexican-American chef feel about being a “trend” this year? And does this affect the flavors in our food?

His first combined a traditional ceviche negro and a salsa Veracruzana. Infusing a blue corn tortilla with a little squid ink, he pressed and then inflated it until it resembled a “little crispy globe” and could be punched out and filled with white fish. “I love ceviches, I just feel like they lack depth sometimes,” Zaragoza said of adding an umami-rich salsa. From a western state heavily influenced by Spanish colonizers, the capers, olives, tomatoes, and oregano took on extra flavor from being blackened over a wood-burning fire. “The innovation was to mix both of these dishes and makes something different,” he said.

RELATED: A Tale of Two Zero-Waste Events At StarChefs ICC

He didn’t mess with tradition on a pork belly with mole negro. Cooked over coals at a friend’s restaurant in Brooklyn, “there was a lot in terms of depth of flavor and the technique is old-school Mexican,” he said. The elevation came in terms of plating, which Zaragoza finds to be the easiest part of bringing Mexican cuisine up to a finer-dining level: “The ingredients tell you where they need to go,” he said.

For dessert, a pumpkin roasted in coals yielded flesh with an almost custard-like sweetness. Marinated in reduced café de olla syrup (infused with orange, coffee, piloncillo, and cinnamon) and topped with a fermented Mexican sour cream, citrus peel, peanuts, and marigolds, the colorful and earthy plate was a nod to a traditional harvest dessert served around The Day of the Dead.

“All my food is really traditional Mexican, just with little twists here and there,” he said of his approach. “I try not to mess around with it too much.”

Zaragoza dropped out of college to become a chef. Twice. First business school, then culinary school. “Our parents opened up restaurants because they wanted to put us through college and support us. And now here I am, trying to bring it up to the next level and not mess it up,” he said. The eldest child of his family, he knew he’d have to work harder to show them growth in the field. “Now, they see all the hard work working. But along the process, they've always been supportive.”

When it comes to the next generation of next-generation Mexican-American Chefs, Zaragoza believes technique will most shift the cuisine forward. Crediting the generations before him, he points out that the groundwork has been laid so that Americans already love authentic Mexican flavors—those won’t go anywhere. “We just have to figure out what we want to do, and do it our way,” he said. “I think technique is where people set themselves apart.”

Sweet Talk Beyond the Plate
❤3
back