Florida-born Jeffrey McInnis, a “Top Chef” Season Five winner, grew up surrounded by farm to fork food, both on the fishing boats he spent his youth on, as well as on his grandparents’ working Alabama farms. The Johnson & Wales Culinary School graduate has a 20-plus career spanning a variety of cuisines and cultures from the Caribbean-Asian restaurant at Asolare in St. John, Virgin Islands, to Asian-French Azie in San Francisco to Keswick Hall, an exclusive five-star hotel owned by the Orient Express in rural Virginia to North Africa and Europe while working at The DiLido Beach Club at Miami’s Ritz Carlton.

In 2010, McInnis became the Executive Chef for the Miami-based restaurant, gigi. Utilizing his signature culinary style, he developed a highly acclaimed menu, catapulting gigi into one of area’s most popular restaurants. Among other awards and honors he was nominated People’s Choice Best New Chef, Food and Wine Magazine 2011.

Chef McInnis eventually returned to his culinary roots, bringing a taste of the south to Miami Beach with the opening of Yardbird Southern Table & Bar in 2011. During his tenure at Yardbird as Chef/Partner, both he (Best Chef: South) and the restaurant (Best New Restaurant) received three James Beard nods in two years.

Now settled in NYC, Chef McInnis is continuing his Southern hospitality tradition with Root & Bone which he runs with his partner, Chef Janine Booth, of “Top Chef” season 11.

Symrise sat down with him to “dish” on what he’s cooking up now. 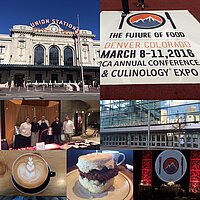 Symrise: What are some of your favorite ingredients?

Chef Jeff McInnis: I have a few. Corn is one. It’s very versatile and goes from grits to cornbread to simply served fresh or grilled. It’s one of my favorite vegetables.

I also really enjoy playing with chicken. It’s just fun. It’s inexpensive and everyone loves it. When properly brined and cooked, there’s nothing like it.

Another favorite is good old olive oil. I love finishing plates and dishes with a great high-quality olive oil. It helps intermingle flavors.

Lastly, I love finishing with sea salt. Good salt, when used properly, is an ego booster for the star ingredients. Big flakes also give items texture and crunch.

Symrise: Is there an old standby ingredient?

Symrise: What kind of food do you like to eat when you're "off duty?"

Chef McInnis: I like to eat and explore all kinds of cuisines just like anyone else. From Mediterranean to Asian, I enjoy any well-prepared meals.

Chef McInnis: In my kitchen, we collaborate. My partner, Janine, and my sous chef, Charlie, all work together and bring in new ideas and new dishes constantly. Also the seasons here in NYC are a huge inspiration. Cooking locally and seasonally is a big part of our menu.

Symrise: What trends are you seeing in the kitchen/food world?

Symrise: Who do you idolize in the culinary world?

Symrise: If you were stuck on a desert island, what food would you take with you? And what pan?

Symrise: Any new plans/ventures up your sleeve?

Chef McInnis: Yes, a new menu launching in spring as well as a great cocktail program.

Check back on in-sight for more exclusive chef interviews!

Beyond the Plate Good Libations
❤10
back