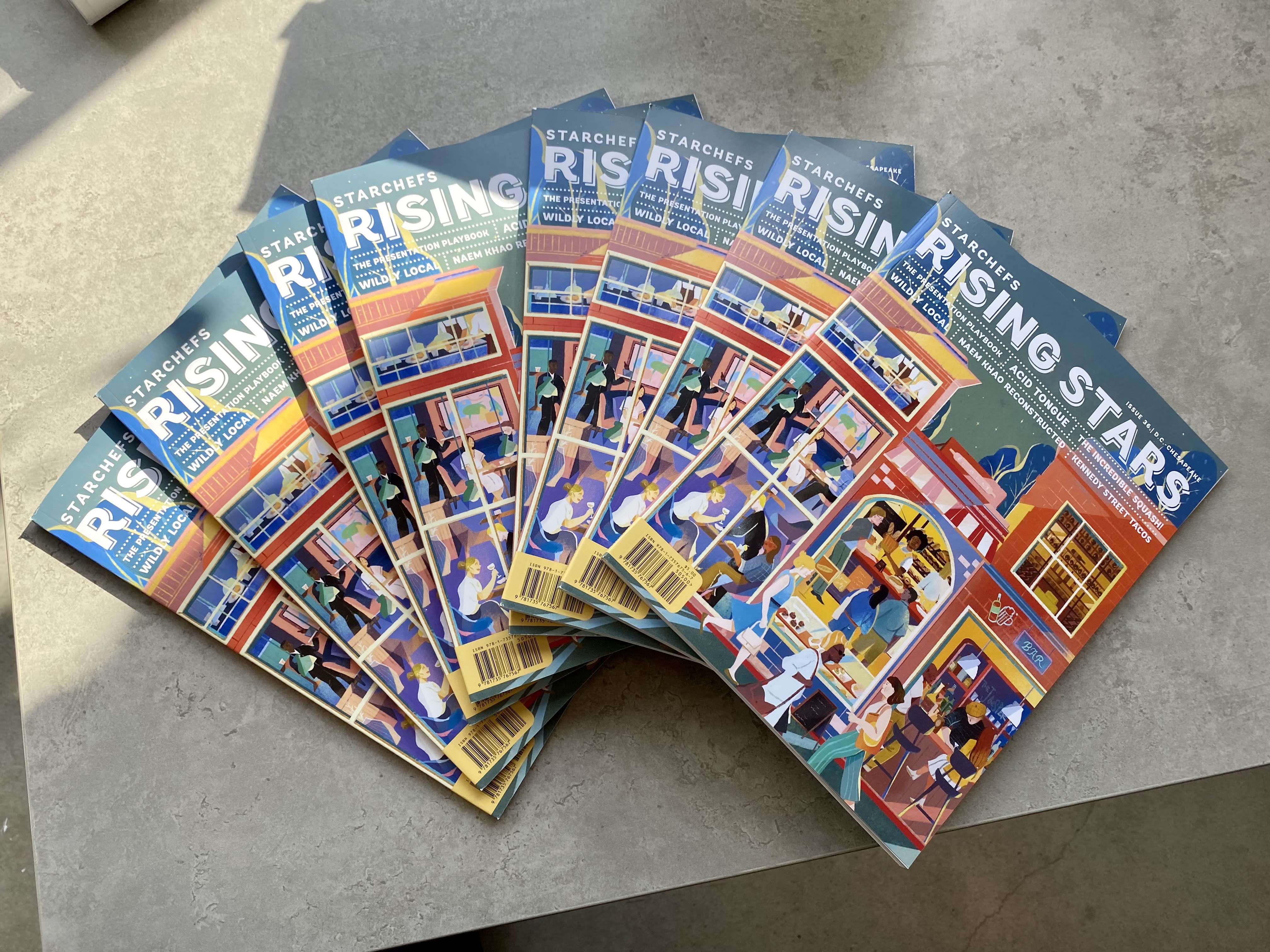 Washington DC’s ultra-hip outpost of the LINE Hotel group is maybe the most exciting addition to the Adams Morgan neighborhood in years. Humming with the sophisticated food and drink of 2018 Rising Star winner Opie Crooks, the hotel is the last place you might expect to hear chefs wax poetic about fast food -- but the 2022 panel for DC-Chesapeake Rising Stars Restaurant Week was full of talk about guilty and not-so-guilty pleasures.

Moderated by Symrise’s VP of Marketing and Consumer Insights Emmanuel Laroche, this was the first time the event was held in DC since 2019 and while COVID didn’t dominate the conversation, its presence was implied in the immediate chatter about comfort foods. Gemma Hardy, Bartender at Moon Rabbit, mentions that her restaurant’s staff leans on large orders of McDonald’s after a hard day. Annie Coleman, Pastry Chef at Tail Up Goat and Reveler’s Hour, prefers to unwind with mock chicken nuggets (even though she’s not a vegetarian).

This opens into a broader discussion of how mass-market food concepts can have a real impact on the chefs’ creative processes. Johnny Spero, who is behind several spots in the DC area, delivers an aside about how the menu at his pizzeria-brewery collaboration Nighthawk Pizza in Arlington was inspired by his “white collar guy with blue collar taste” love of Chicago tavern-style pizza. Annie talks about how the garlic knots and big plates of pasta at Reveler’s Hour, less formal than the offerings at Tail Up Goat, are meant to evoke an Italian dinner party.

Meanwhile, Will Fung, Head Chef at José Andrés’ China Chilcano, describes his respect for how The Cheesecake Factory can successfully replicate the same crowd-pleasing menu all over the world -- he even jokes about wanting to open a scaled-down version of the chain with elevated versions of their greatest hits. Will offers an even more personal example of translating comfort food into restaurant-quality dining. “Everything needs to have a home cooking base,” he says, describing how he’s adapted some of his mother’s homemade Chinese classics for the special Lunar New Year menu at China Chilcano.

Related: How the Pandemic Has Affected Chicago's Rising Star Chefs

Annie’s earlier mention of mock chicken nuggets prompts a member of the audience to ask about these chef’s perspectives on the rapidly-growing alternative protein or “meat mimicry” industry. Rob Rubba, whose menu at Oyster Oyster is entirely vegetarian and local, isn’t a fan of meat mimics and says “I don’t think you’ll achieve what you want [in a meat substitute] as a whole food.” And while Gemma appreciates the presence of chewy bulgur in a veggie burger, she and Will acknowledge that tofu and other soy proteins are staples of different Asian cuisines and feature heavily in the menus at Moon Rabbit and China Chilcano.

All this talk about the chef’s own preferences leads to a shift in perspective about what their customers actually like. When another audience member asks the panel how they obtain feedback, responses are mixed. Johnny tries to get inside the diner’s head by having the staff at Reverie sit and taste each full dish before seasonal revamps rather than standing and sampling as they cook. Behind the bar, Gemma has the advantage of directly asking diners and drinkers what they’re looking for. Rob attests that he also likes to engage in dialogue right at the table, but notes the added advantage of digital platforms like Resy for collecting and synthesizing feedback.

For Annie, some of the disconnect may come from the different conceptual languages spoken by chefs and patrons. She shares an anecdote about visiting a buzzy restaurant with a group of friends who weren’t necessarily culinary experts. “They didn’t know what any of the seasonings were, they didn’t know any of the techniques listed on the menu, they didn’t know how they were supposed to order […] It was still a great dinner, but it really put a downer on [the evening].” Gemma attributes some of this trend to the effect of COVID on the hospitality industry, noting that chefs have been isolated from the public for so long and that many front of house staff need to be re-trained to help educate consumers on ‘insidery’ products like pork floss.

The afternoon wrapped up with a rundown of products and ingredients that these creators have been particularly excited about. Johnny looks forward to a seasonal surge of spider crabs and whelks from his Maine-based seafood suppliers. Gemma recently got her hands on mandarinquats, a tiny hybrid of mandarins and kumquats that will blend well in spring cocktails. Will is waiting on a shipment of domestically-grown sansho peppercorns. Rob is psyched to introduce diners to sugar kelp, harvested in coastal Connecticut; he uses the dried version as a seasoning powder and marinates the fresh variety before combining it with more savory veggies. And while Annie has subsisted on her stash of dehydrated cornflowers and carrot flowers, she can’t wait to bake with fresh rhubarb and strawberry again.

There’s one local snack that doesn’t seem to have any supporters on this panel, though. “Jumbo slice is disgusting,” Johnny says of DC’s cheap, oversized answer to New York-style pizza. Everyone else nods in agreement. “Will I eat it if someone puts it in front of me? Sure. But it doesn’t bring me any joy.”