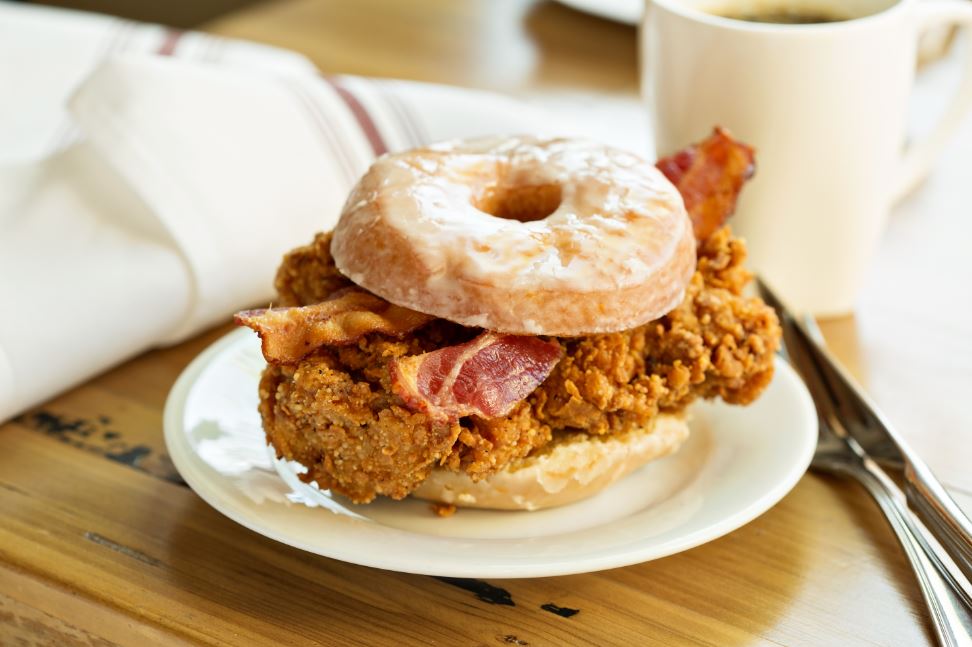 Chicken and Doughnuts: The Next Breakfast Trend

This past summer, I had the pleasure to be a part of a chicken trends food trek in L.A. In those two and a half days we visited 20 restaurants that either had unique uses of chicken or flavorful mashups. One of the most interesting trends that stood out to me was the increased use of chicken for breakfast. It doesn’t help that I thoroughly LOVE breakfast (at any time of the day). That’s probably why it resonated so much. There’s something about sweet and savory combinations that, for me, can’t be beat. Two restaurants on our trek immediately caught my eye.

Astro Doughnuts & Fried Chicken was our first stop on the trek and they really set the bar high. Not only do they sell fun, flavorful doughnuts, like the Creme Brulee and Maple Bacon, but they also sell fried chicken. Sure you can pick from a 2 to 8 piece white/dark meat combo OR you can get adventurous and try 'The Works' sandwich like I instinctively did. 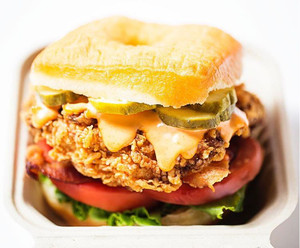 'The Works' sandwich has a crispy fried chicken breast with thick cut bacon, fried egg, melted cheese and pickle all on a savory doughnut! There are a lot of flavors and textures going on with this sandwich but every component complimented each other. The chicken gave you a crispy, savory element while the pickles cut through for a nice tangy-ness and the bacon added a depth of smokiness. The best component of the sandwich had to be the use of a plain, un-glazed doughnut in lieu of the obviously over the top glazed doughnut. Too often you see the glazed doughnut used which becomes a sticky mess. Letting the naturally sweet dough shine through was an excellent choice and it infinitely reduced the amount of messiness. Definitely worth the calories!

We started our second day of the trek with Birdies. Like Astro Doughnuts, Birdies is a doughnut and fried chicken concept with the focus on serving fried chicken by itself, as well as unique doughnuts like Cinnamon Toast Crunch or Horchata Twist with Dulce de Leche. Birdies stood out to me because they offered a breaded, spicy chicken sandwich that is a good way to jump start your stomach in the morning. Also, Birdies uses a brioche bun instead of a doughnut for the bread component.

The Birdies Spicy consisted of a spicy breaded chicken breast, cured pickles, Tillamook pepper jack cheese, coleslaw and ghost pepper mayo all on a toasted brioche bun. The spiciness of the fried chicken and ghost pepper mayo paired well with the creaminess of the coleslaw and vinegary cured pickles. It was spicy, but not to the point of misery and rethinking your life choices.

While the idea of pairing chicken with breakfast foods isn’t new news, it is exciting to see chicken served with food other than a waffle. Operationally, it’s even easier as you only need a fryer instead of both a fryer and a waffle iron. I also found it interesting that these two restaurants are within a mile of each other. It might seem a little niche at first but after eating their doughnuts you realize that having a savory pairing really helps. It cuts through the incredibly sweet doughnuts that no one could finish by themselves. They were quite rich but that’s where the fried chicken came into play. The savory, fattiness helped cut through the sweetness from the doughnuts. It’s probably why breakfast foods are so much fun and flavorful. It has the ability to be sweet and savory all in one dish. If you’re in the L.A. area and love breakfast as much as I do, stop by Astro Doughnuts and Birdies! You won’t be disappointed.